About a year ago, I sculpted a model. It was a very simple joke: 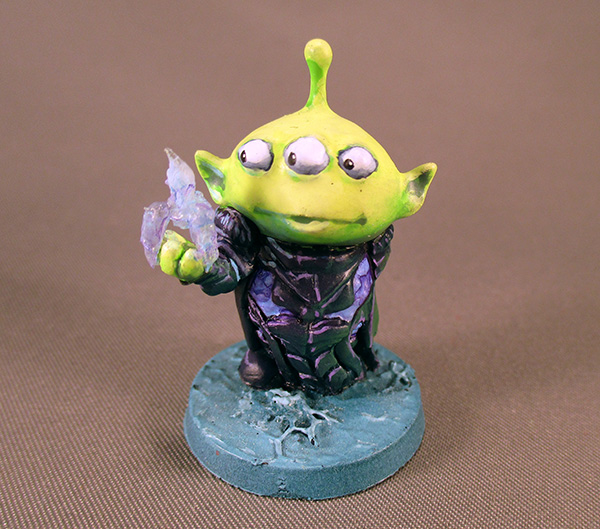 And we all had a good laugh. In the closing notes for that writeup, some thoughts passed through my mind:

An interesting thought occurs to me in the aftermath of this piece. Sculpting and painting the model took a grand total of like… a week? And I was procrastinating pretty hard (specifically, playing a whole bunch of X-Com) throughout a lot of that time. But given that time as a base unit, in theory I could do an entire 10-model army of similar chibi Infinity models (i.e., adapting canon uniforms over a cartoony body) from scratch in like two or three months.

I have no idea what to do with that realization, exactly, but it’s interesting to ponder.

I pushed the thought away for a few months to focus on other priorities, but my brain kept coming back to it. During a particularly conference call-heavy week at work, I found myself scribbling out fun pose ideas on sticky notes: 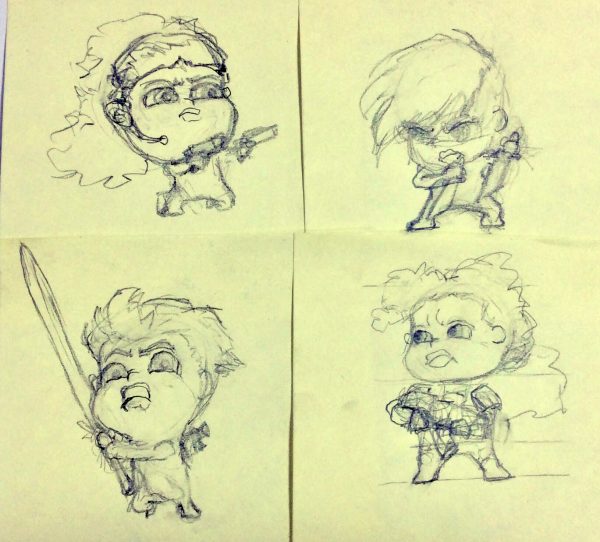 And like… I really started liking the idea. What if I did do a whole army of these silly bean-headed folk? I’ve honestly never been that huge of a consumer of other people’s chibi art– it’s fine, but in and of itself it’s less interesting to me than traditional real-scale art– but I’ve always found it a pretty entertaining scale to draw and sculpt in myself. The huge heads and cartoony style give you a huge canvas to play around with expressive faces and dynamic poses, and the scrunched body proportions minimize the exact parts that tend to be boring and annoying without adding much interest– namely, legs. Also, one of the fundamental challenges of sculpting is usually fighting with clay’s desire to be soft and round, and laboriously working to force it into sharp and hard-edged shapes. With chibi, that initial roundness is actually exactly what you want, so you can skip most of the refinement. So in the end, working in chibi scale just ends up being “normal sculpting, minus the misery.”

It took me about four months to make up my mind that this was actually a path I wanted to walk down, but a new problem took another few months to work out: what army, exactly, did I want to make?

I tend to be pretty picky about my army projects, only picking up models if I’m pretty confident that the painting and gameplay for the army will both be enjoyable (though I’m sometimes wrong on one count or the other). And while Spain has been firing out new sectorials every few months for years now, many of which contained models that felt like they had the ingredients to become personal favourites, there wasn’t one single army with a critical mass of amazing models that really got me excited to adopt it.

The closest I came to making up my mind in the first two thirds of 2019 was after I made up a set of concept sketches for a potential Varuna army:

I loved how the ORC and the Zulu looked at this scale, and the SCUBA Kamau prompted some major giggles. And for a month or two, I started telling people in my group that this was finally the army I was going to pull the trigger on after six months of hemming and hawwing.

But… honestly, deep down, I was never that excited about them. There was more to like in Varuna than in the other candidates I was considering, but ultimately it was still just three or four really solid character designs that I liked, and everything else I was planning really was  filler. I really just wasn’t that excited about them, which was then only exacerbated when I realized that the list I was coalescing around for visual reasons– a mixed ORC and Kamau link backed up by a lot of Camo troops– was also alarmingly competitive, which is something I try to avoid with my lists. I always have the most fun when I’m piloting pure trash, and it was actually kind of hard to build Varuna lists including the models I enjoyed that didn’t feel really over-tuned.

And then… I kinda just randomly changed my mind. Going back through e-mails from last October, I don’t really see any particular inciting incident that drew my attention to Foreign Company; just, one day, I off-handedly mentioned to the unfortunate recipient of my continual stream of daily e-mails that the merc sectorial looked interesting, and then over the course of the next few days, the idea just seems to grow. I put together sample army lists, almost immediately settled on a colour scheme, and mused about how to keep such a character-heavy sectorial looking cohesive.

I don’t know what initially triggered the line of thought, but it’s really clear looking back over those e-mails what made the thought stick: I was excited. Finally, after months of indecision and failing to find anything that generated enough interest in me to drive a project forward, I was bubbling about this new army I’d discovered, and all of the weird and cool models it contained.

And that was that. My new army for Adepticon 2020 was going to be a chibi Foreign Company army with every character model they could play. I made up my mind in October, drew concepts in November, and sat down to work in January. And true to my initial prediction from last year, it really did take about one week per model, and just under three months overall.

It’s done now, and it’s one of the best things I’ve ever made. I literally can’t remember the last time I smiled this much about something I built. Except now, at the end, two things vex me:

Vexation Number One: I did all of that work, and then… the pangolins attacked. As I write this, the world is huddling in bunkers, trying desperately to convert gym socks into face masks. While I was upset about the cancellation of Adepticon for all the same reasons as everyone else, I was also faced with my own unique bonus tragedy: I would be robbed of my opportunity to bully my way into multiple Best Army medals. My ego is not small– see the title at the top of the blog for evidence– and I burn praise the way y’all burn food to stay alive. And while I’m sure the Internet will say some nice things about all of this, my incredibly selfish reaction to the entire COVID-19 mess continues to be: “It sucks that I can only show my army off online and can’t blow people away in person.” Yeah, I’m that asshole. My biggest problem isn’t the dying people, it isn’t the cratered economy or the chain of personal financial apocalypses… it’s the fact that I don’t get to hear praise to my face.

And I know that’s stupid, but… it’s really hard to explain to my brain why it doesn’t get its tasty treat at the end of the agility course tunnel.

Vexation Number Two: While that first problem is really only my baggage to work through, the second item is something you’ll need to deal with too: this is a ten-model sculpting project, and there is just no way to blog about that and have the resulting article be short. For reference, a typical project on this blog usually ends up with somewhere around 50 to 70 photos to frame the narrative around, with particularly large projects having as many as 120 or even 150 pictures stretching out page after page.

This one has… more. Like, way more. All together, the process photos for all ten models amount to 870 pictures. After cutting down to just the important parts. There’s just… so many steps, you guys.

And while the obvious answer would seem to be “just don’t show the full process every time, and only show the bits that were interesting about each model”, that approach runs up against a philosophy I’ve tried to hold onto since I started posting here exactly 101 articles ago: I always assume that every article I write is someone’s first visit, and so I don’t rely on an expectation that anyone is familiar with “my usual process” or “the typical steps”. And while that assumption usually only matters for one model at a time since that’s usually the scale of my projects, even here in this multi-model article (or series of articles, as it’s turned out to be), the sheer scale of what I’m presenting makes it absolutely inevitable that most people won’t bother to read the process for every single model. More likely, even if you’ve gotten this far, you’re going to fade in and out as I just keep talking, and talking…. and talking.

In the end, I have to assume that a good chunk of the people who bother to show up here will only read through one of these walkthroughs in detail– at best– and that one chosen model might not be the first one, so I want to make sure that no matter which one they choose, the important details will be there for them to make sense of what’s going on.

But! For the rare few who do decide to make the full hike, I do want to reduce at least some of the hell you’re about to experience. And so, I present to you:

While the final details of each of these ten models are going to be fairly unique and interesting, the foundational steps for each model will be VERY repetitive. I’m going to explain ten times that you need putty to make clay stick to wire; and I’m going to explain ten times how to sculpt the edge of a piece of clothing. And while I think it’s important to include that text each time, I want to make it easy for those who have been through the full death march once or twice to just… skip over those parts on all remaining models. So throughout this article series, anywhere I need to repeat a step that’s been covered already, I’ve stuck those repeated blocks of text in that easy-to-spot green box. Anywhere you see that box, you can rest assured that it contains only standard steps that you’ve read before, and confidently skip past it without reading. Any text not inside one of those boxes is unique to a specific model, so you can read those parts or not, depending on your Caring Index.

Oh yeah, and the article breakdown. I am usually vehemently opposed to breaking projects up into multiple articles, but it was just unavoidable this time. I’ll be posting this mess across five articles to make it easier for those who want to read the whole thing to chew through a bit, take a break, and then come back later:

Alrighty, that’s all the preamble I’m going to make you sit through. Go now, and gaze upon my works.