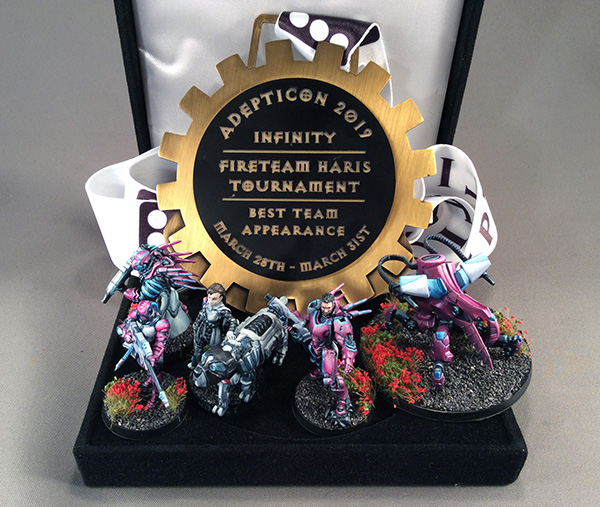 Like many new Infinity players, I spent a lot of time before and after picking up my first army ogling Corvus Belli’s extended range of models. The aesthetic style was a really refreshing change from the Warmachine models I’d been building for the last ~7 years, and I was frankly awed by the talent on display by their artists and sculptors. While the model range has, of course, its share of duds, I would put the best Infinity models ahead of the best from any other gaming minis line. The character designs were great, the poses extremely dynamic, and the sculpting unbelievably crisp. Stand-outs from these early browsing sessions included the Sepulchre Knight, the Geckos, and Scarface; models with gorgeous detail that make cool little movies play in my head when I look at them. 🙂

I loved these models and a part of me thought it would enjoy having copies of them to paint; however, ultimately I’m just not the kind of person who paints random display models. Almost everything I paint is “useful” in some way, whether it’s part of an army, meant for a D&D campaign, or just a gift for someone else to use. Given how much I dislike painting in general, I just can’t justify the time and pain to paint up something that is “merely” pretty, especially given how many more practical projects I have lined up in my queue at any given moment.

So, the only way I was ever going to own any of these coveted models was to start an army that could run them. I covered the Sepulchre by including one in the first batch of models I bought for the Military Orders army I started out with. The two TAGs aren’t likely to see the same treatment any time soon, however, since I don’t like to collect armies that my friends actively play, and I’ve known people since the start who were playing Corregidor and Druze (even before they had a sectorial). So, I made my peace with appreciating the Geckos and Scarface from afar.

With all that said, there was one other model that caught my eye in my initial browsing that I DID end up acting on. I’ve mentioned it to people for years as being one of the best models CB has ever produced, but that statement is typically met with a response somewhere between, “I have no idea what model you’re talking about” and “…really? That?” It isn’t a flashy model by any means, but it hits all of the markers I look for in a model dead-on– good costume design, evocative pose, and clean sculpting.

That model is, of course, the Imperial Agent Pheasant Rank Sniper. 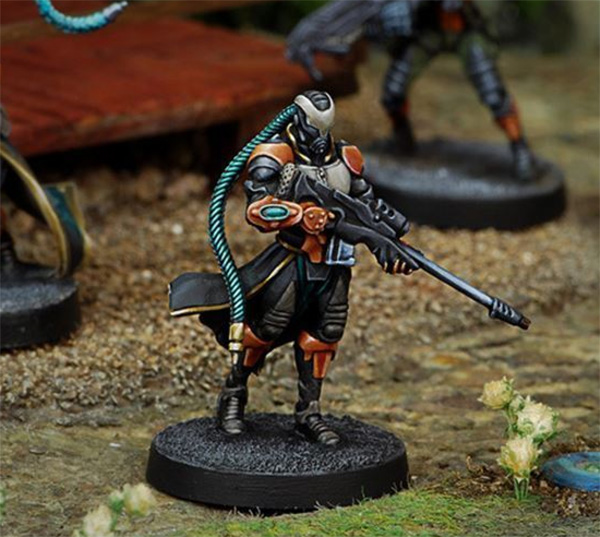 Just look at that swaggering motherf***er. CB’s produced several other Pheasant models over the years, but none of them quite “do it” for me in the same way. The old sword-wielding model has a really awful pose and sloppy detail, while the N3 redesign loses a lot of the old design’s simple elegance thanks to its boxy armour plates and “tech braid”. 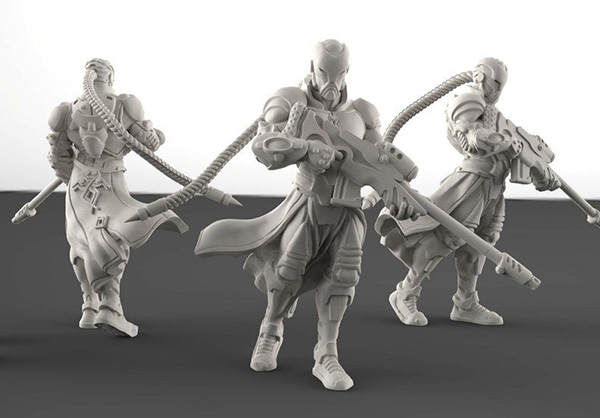 The N2 Pheasant sniper, which was one of the earliest 3D sculpts in the Infinity range (produced by the depressingly talented Javier Ureña), is pretty close to a perfect model for me. A year into my time with the game, when I started casting my eyes outside of PanOceania to think about which other armies might appeal to me, I remembered how much I loved the Pheasant, and decided to start picking up some Imperial Service models to build an army around it.

However, the story took a bit of a turn when I started theorycrafting lists with my new models. Try as I might, I just couldn’t figure out how to build a fun army within ISS back in N2; their specialists were too expensive, their link options were too restrictive, and most of the Agents– which were the key draw for me– were loaded down with piles of mostly useless skills and equipment that jacked up their point costs without really adding anything to their performance. The Pheasant itself was the worst offender of all, topping out at just under 50 points for a sniper model with one wound and zero defensive abilities.

The more time I spent building lists, the more discouraged I got; before too long, I shelved my new purchases and turned my attention back to PanO. Eventually N3 rolled around and brought with it some much-needed repairs to the ISS, including cheaper specialist options, and a paring-down (though not a complete elimination) of the redundant skills and equipment a lot of the existing Agents were forced to carry around. However, while these changes made Imperial Service armies less actively frustrating to build, it still didn’t really make them fun, so other, more immediately interesting armies kept jumping ahead of them in my production queue.

The evolved primate portions of my brain accepted with some melancholy that the Imperial Service would likely never become the army I wanted it to be, but my Crow Brain— which, let’s be honest, makes most of my purchasing decisions– still considered it “an army I own”. So despite the fact that I had never opened any of the boxes I already owned and didn’t see that changing any time soon, I continued to make the pile taller whenever new ISS models I liked were released. I didn’t really notice this happening in the moment, but eventually I did some inventory on my “to do” pile and realized that I had somehow accumulated over 700 points of ISS models.

This realization only made the problem worse. Now, if I ever wanted to do anything with the models, I was staring down a truly intimidating painting docket that would likely take years to churn through at my usual glacial painting speed. This led to a self-reinforcing cycle of misery– I felt guilty for not working on the army, and not working on the army kept it too intimidating to start.

This cycle continued for over two years.

In mid-2018, however, the impasse was finally broken by an unforeseen miracle: I ran out of room in my Tohaa case. The army that had usurped the ISS’s position as my first expension force had grown steadily over the years, and eventually the case I was using to transport my deceitful artichokes filled up its last available slot. I still owned more Tohaa models that I had planned to paint eventually, but my enthusiasm for painting those detail-encrusted models had been waning pretty hard for the past year, so I decided to give myself a present: I simply declared that my Tohaa army was finished, and that anything else that hadn’t risen out of the silver pile would stay there. This decision was immensely liberating for me, and was repeated a month later when I similarly filled the last slot in my Military Orders case and declared that army functionally complete, as well. And while my NeoTerra army lives in a much larger case with plenty of room, I rode the wave of self-liberation by pulling out a handful of models that I had picked up years back and subsequently lost interest in completing. That left only three or four models in that army’s queue, which immediately put the completion of a third army in striking distance (where it remains today, but with fairly realistic plans to finish it up over the next few months).

Discarding models that had cost me hundreds of dollars was strangely exhilarating, but even that dramatic purge didn’t really make a dent in my to-do pile. I feel an ethical obligation to “pay rent” wherever I play my weekly games, even if I don’t really need anything at the moment. As a result, I currently own the next 3 armies I’m planning to build, including a 12-model Hassassin list and most of a double-Raicho Morat army; and I also have the stalled remnants of a massive 30-model conversion project that will someday emerge as a fairly hilarious Bakunin force. And of course… there was the ISS. 25 models strong, the Asian Space Gestapo was this ever-present shadow looming over my hobby life.

However, after many long, painful years of denying the problem, I decided to finally do something about it. And the solution, as it turned out, was to simply give it away. Not all of it, of course; I had started collecting the army because I wanted to paint a model, so I pared the collection down to only a tiny handful of the best-looking models in my pile, and handed the rest to whichever locals wanted them. The remaining models didn’t quite make a 300pt army when I added them up, but serendipitously, I realized that the bounty hunters I completed last year could be played in relatively large numbers within the Imperial Service, and adding them to my tiny roster of pretty ISS models almost perfectly rounded out to a legal army.

With the obstacles cleared away and some sort of success finally in sight, I decided not to wait any longer, and launched into one of the most productive painting sprees I’ve had in years. I picked a fairly unique colour scheme that I thought might be fun to try, and then in the span of 3 months, I painted eight models to the highest display quality that I’m capable of. It hadn’t been my plan to make this my Adepticon army for the year, but the timing ended up working out perfectly anyway, and I finished up the army (and a sweet themed transport tray) with a day to spare. It wasn’t intentional, but the Pheasant Sniper that had started the entire ordeal was the very last model to be completed. 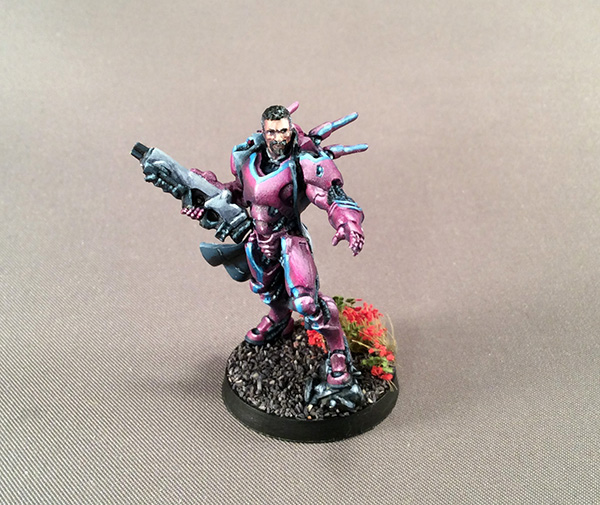 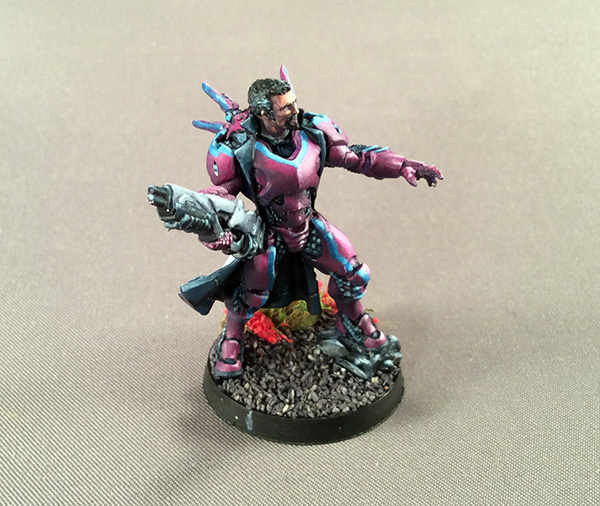 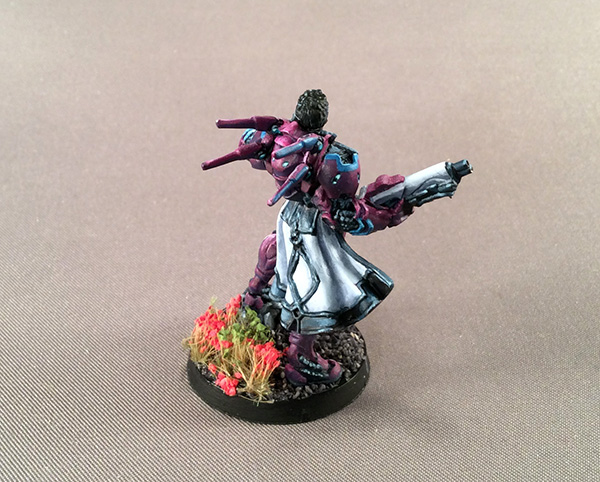 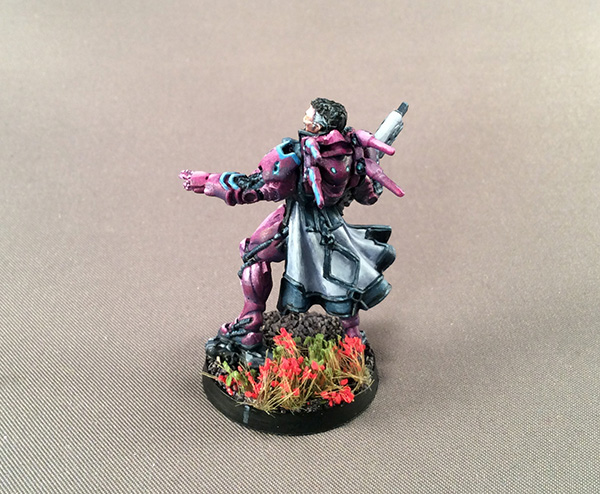 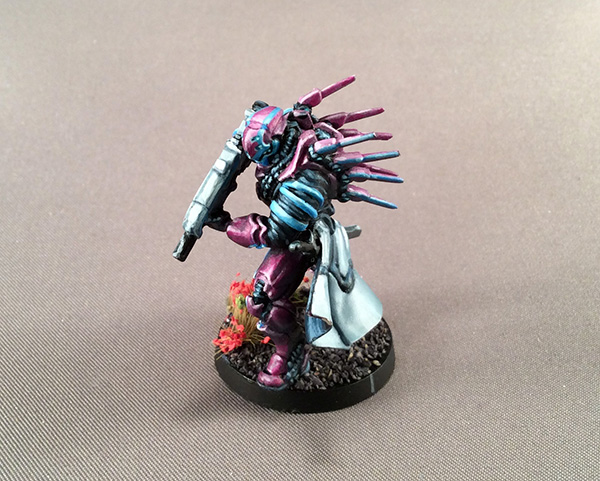 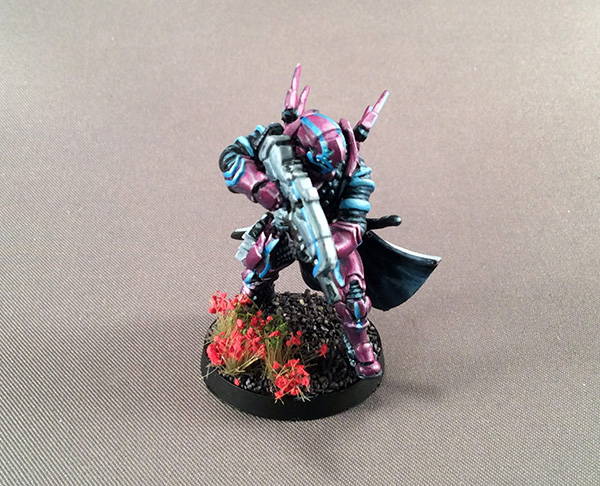 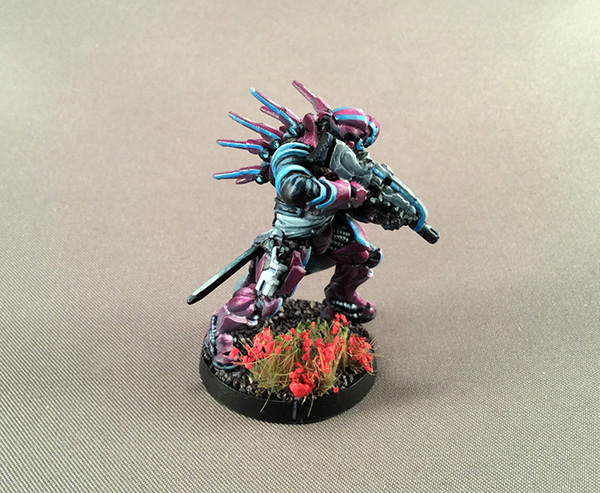 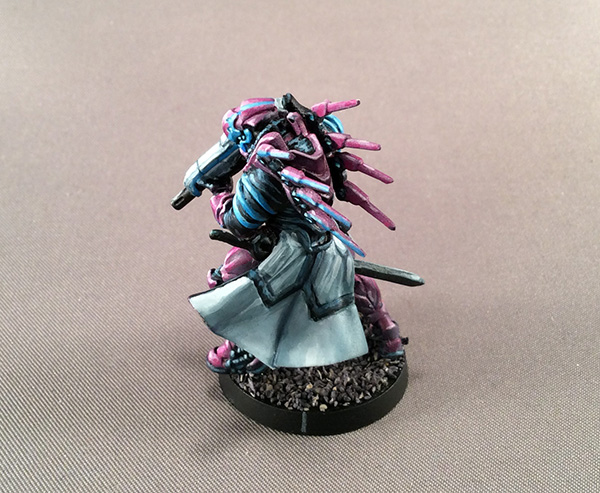 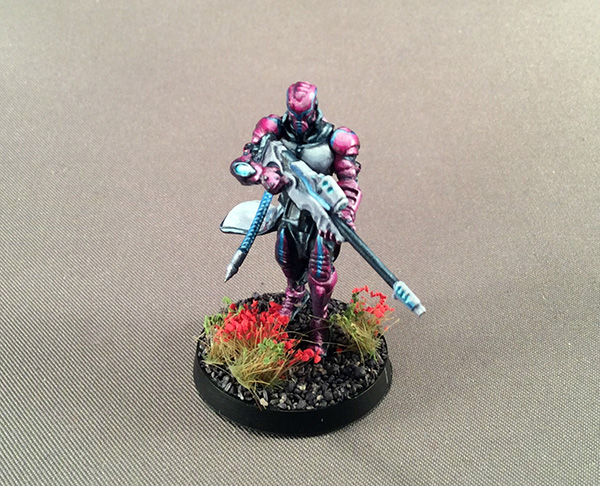 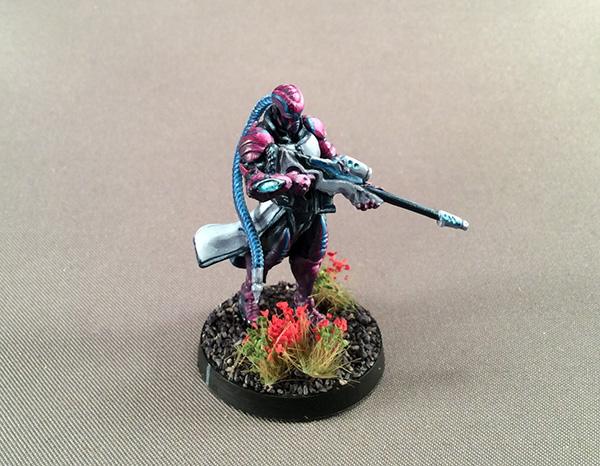 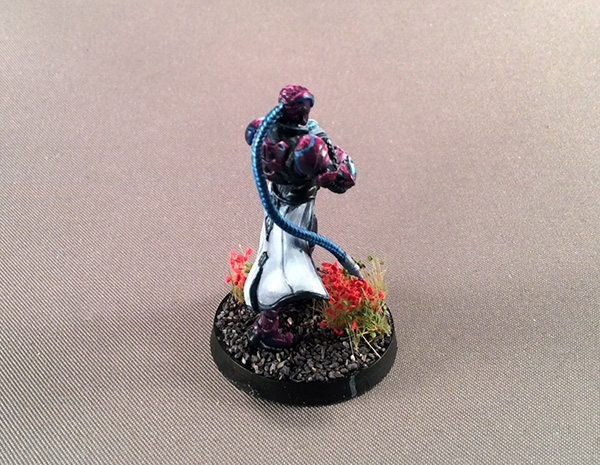 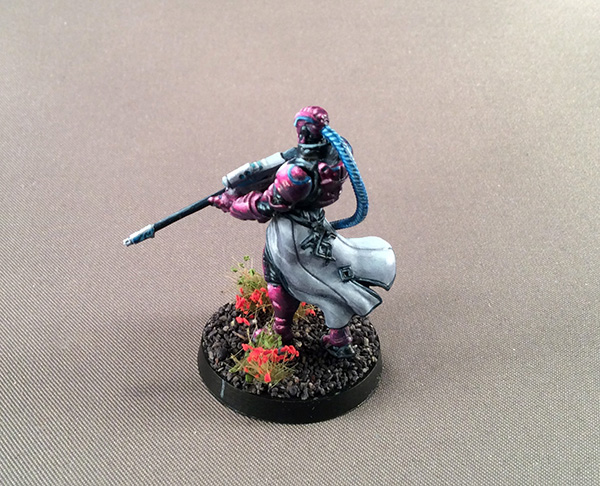 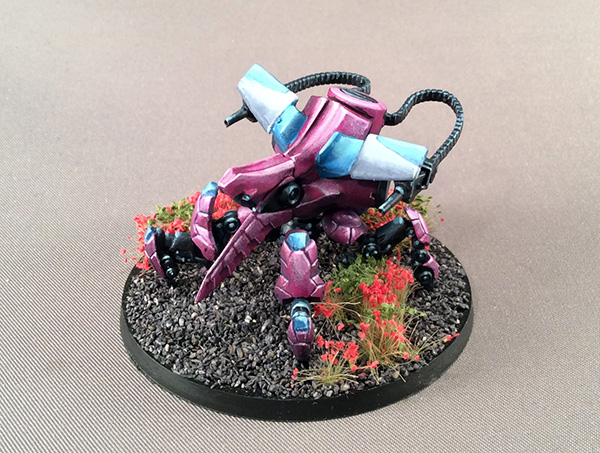 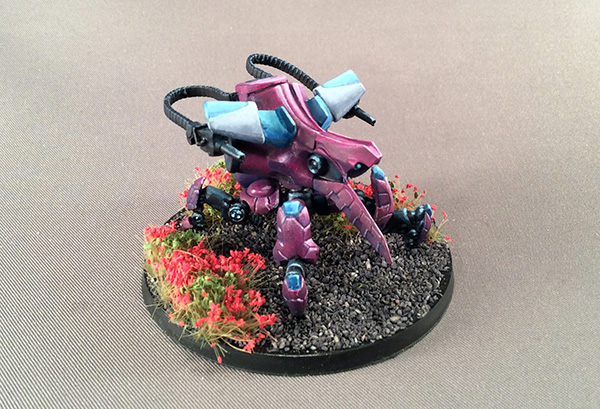 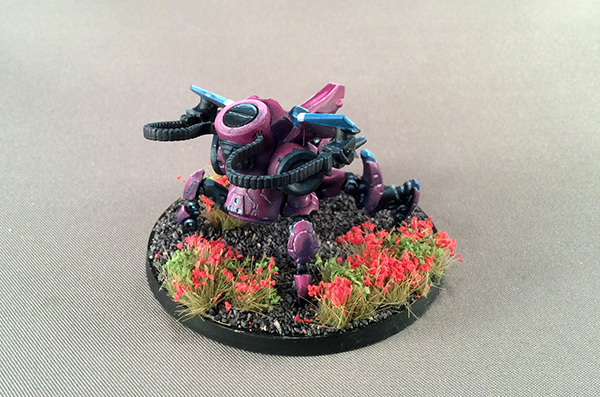 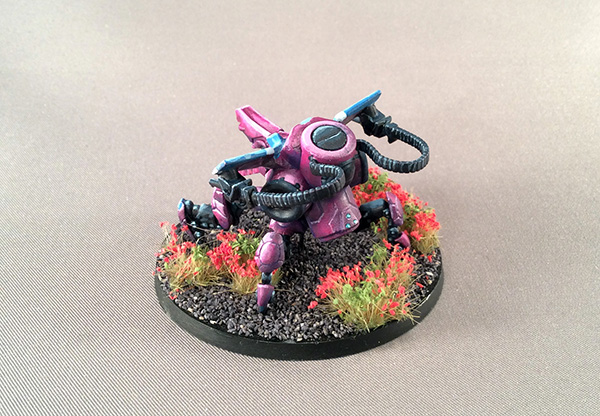 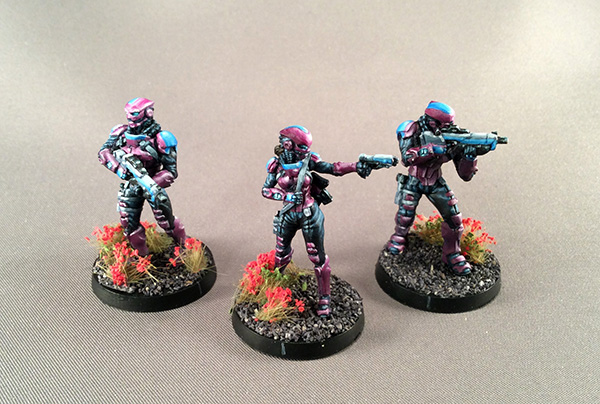 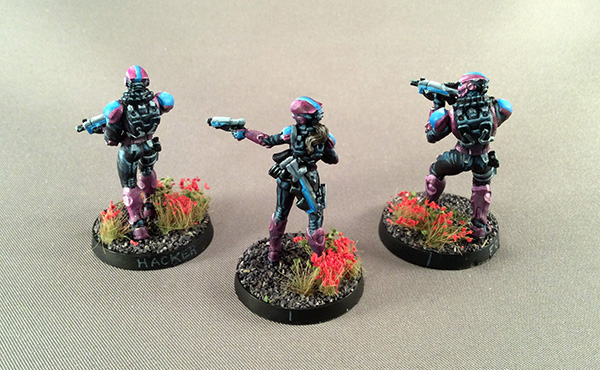 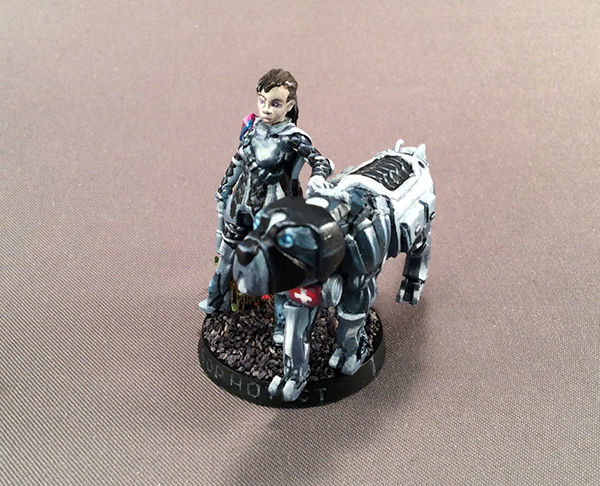 I don’t like the Sophotect model, so I decided to take advantage of Corvus Belli’s generous proxy policy by converting Andromeda into the K-9 handler for a robotic saint bernard with a brandy keg around its neck.

Because every army I make has to have at least one deeply confusing model. 😛 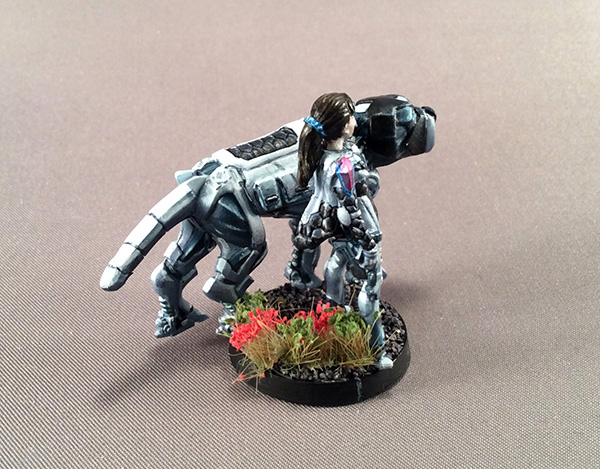 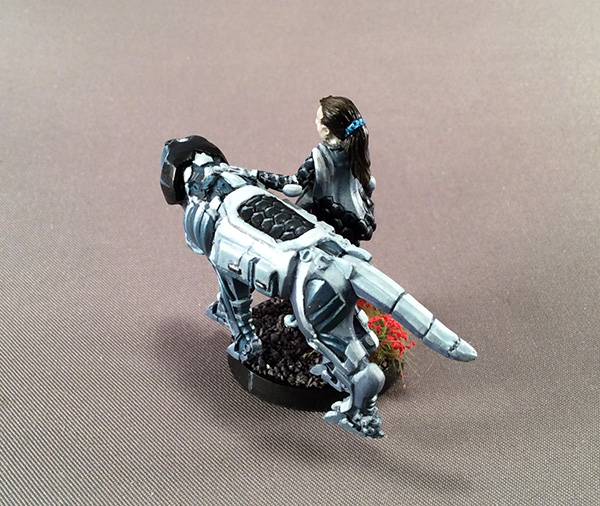 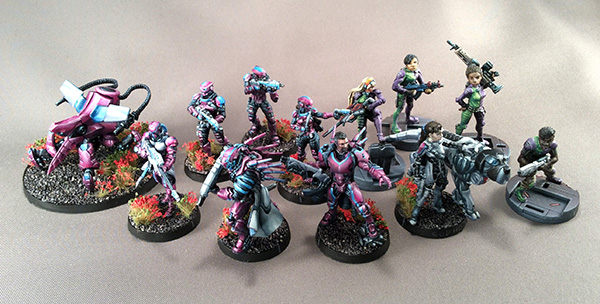 The whole gang, including the Bounty Hunters. 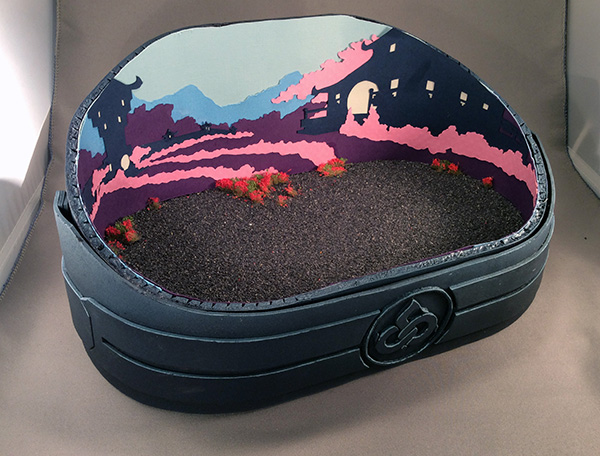 My awesome case. See the end of the video above for a demonstration of the storage compartment. 🙂 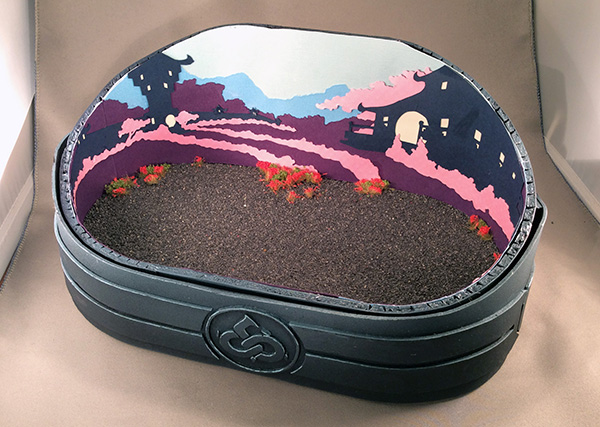 The army isn’t competitive; it’s barely functional. And honestly, it isn’t even that fun— while it’s neat to finally try out the Smoke + MSV combo after years of primarily playing PanOceania, the army is overall pretty boring to operate. There was no great revelation at the end of the long tunnel, just some fairly average soldiers with combi rifles.

All I care about is that it’s done, and it’s some of the best painting work I’ve ever done, and most importantly, I finally made some order in at least one corner of the mess that is my hobby schedule. I have legitimate, non-metaphorical, medically-diagnosed ADD, and I’m awful at managing it, and as such I’m great at starting projects but close to USELESS at finishing them. But this week, I get to mark one complete, and move on with my life.

And even that small win feels pretty great. 🙂

Fun postscript: I played the army in the team event at Adepticon last week, and my team won Best Appearance (aka “best painting”). 😀

Our combined entry consisted of my army: 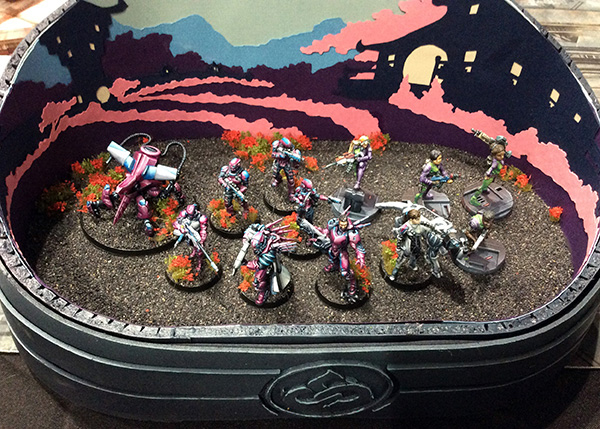 …my friend Scott’s Druze army (which got comedy points for his awesome Suppressing Fire markers):

…and a camo-heavy TAK army that is confusingly the child of two Daves: 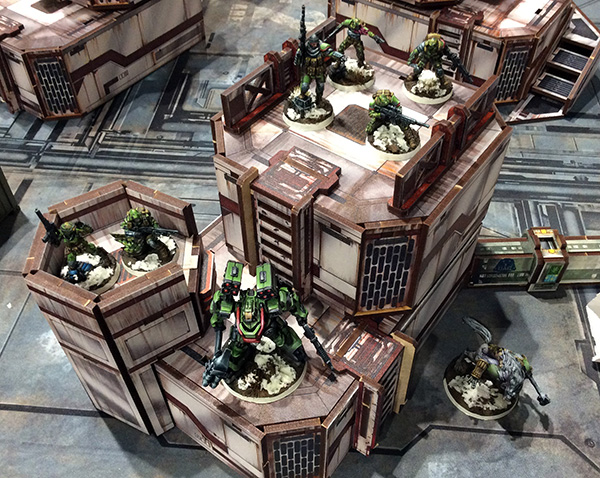 So, that was a nice ribbon to tie the army off with before retiring it to a display shelf at our store. 🙂