I’m working on a terrain project that isn’t quite ready to show yet, but I didn’t want to miss my monthly bloggerating, so instead I’ll show off some art I made for the project: 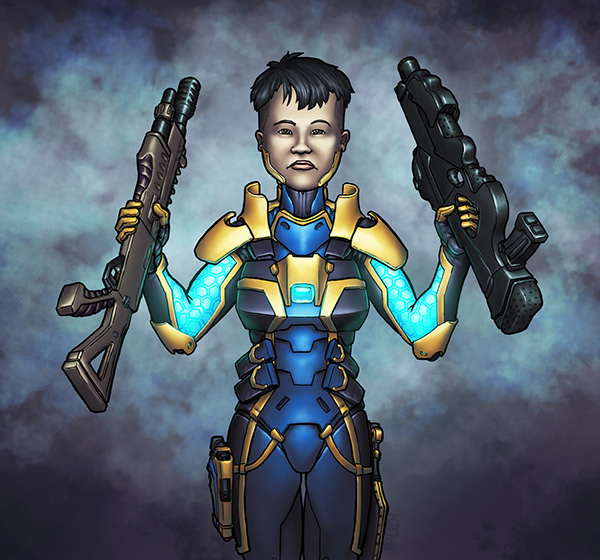 I don’t draw very often– maybe 2-3 times a year– and when I do, it’s almost exclusively fantasy art. I just find it a lot more enjoyable to draw low-tech clothing and equipment; sci-fi outfits demand much more care and precision when drawing, and honestly the process just kind of bums me out. As a result, I think this is the first Infinity art I’ve made since the story league I participated in in 2015, and the first ever of what I would consider “full process” art– going from pencils, to inks, up to colours.

Aaaaaand it’ll probably be the last for a while, because I still don’t find all the hard edges to be that fun to draw. 😛

So, what’s up with this piece? Why did I break my no-sci-fi rule, and why is the Kappa so awkwardly posed? Well, that would be because I was working on a terrain piece that really demanded a propaganda billboard of some sort, and if I was going to do that, I might as well follow through on a joke I’ve been vaguely meaning to do for five years:

That’s right, it’s the joke everyone makes in their head when reading through the fluff blurbs in the weapon and equipment sections: “HAHA THE CONCILIUM CONVENTION BANS IN THE RULEBOOK SURE ARE SILLY”.

EDIT: Someone asked me to make a Spanish version as well, so, uh… donde esta la zapateria, muchachos!

As always with my art posts, I recorded myself colouring this dumb meme and turned it into a time lapse video set to music:

Aaaaaaaand… that’s pretty much it for today. Next month’s post will probably be the full project that this billboard was made for, which, SPOILER, is going to be another papercraft kit you can download and make yourself. 🙂