A Gift Twice Given

Alright, let’s look at some actual modeling stuff before y’all go cross-eyed from my emotional LiveJournaling.

After we had decided that I was going to use his army as airbrush practice, Tom started looking into basing options and decided that he liked these Warsenal bases: 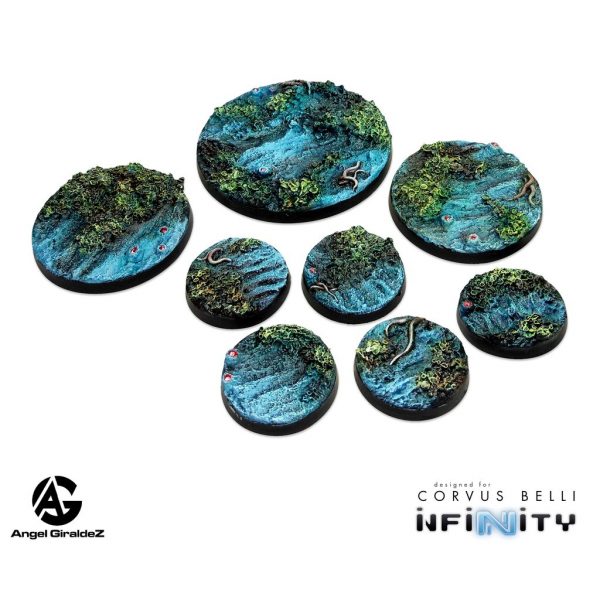 However, while I generally love Warsenal and own several full sets of their bases, my first reaction on seeing that picture was, “Actually, that wouldn’t be that hard to replicate.” Artificial basing textures (deck plates, hexes, and so on) are hard to do well yourself, but natural textures are SUPER easy. I didn’t have a specific plan in mind, but I was confident that I could get something pretty close with some combination of acrylic gel and craft store lichens and mosses. 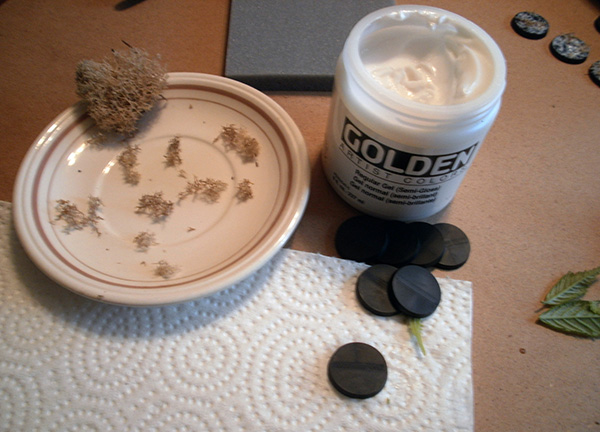 Tom and I made an afternoon activity out of it one Saturday before D&D. He had gathered all of the bases that came with his models (which he had expanded since my initial purchases to include about 85% of the sectorial’s options), and we sat down at his dining room table and started poking the ingredients I brought to figure out something that worked. 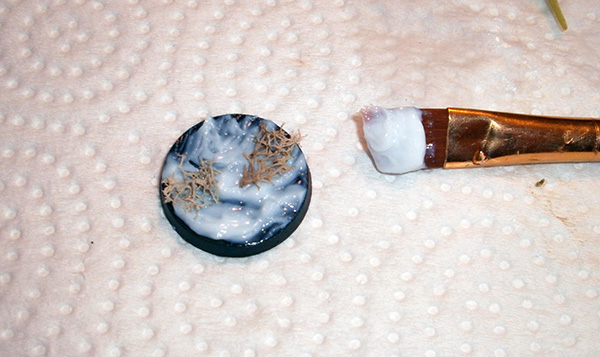 I had a few ideas that I wanted to try. Right off the bat, I determined that simply brushing the gel onto the bases didn’t give a very interesting texture, so we would need to shape the gel somehow. However, on the plus side, tiny clumps of lichen looked fantastic dropped into the goo. 🙂 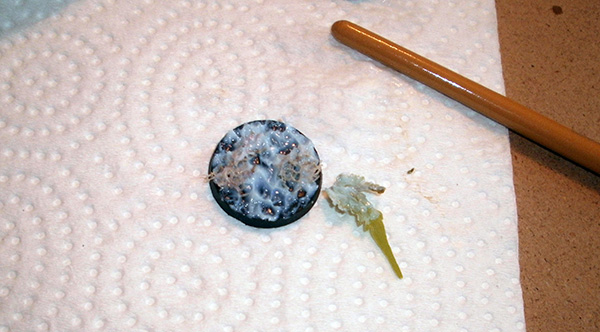 My first thought to try to shape the goo was to wet a brush and try to use that to sculpt a texture into the base, but the gel was so sticky that it always dragged around with the brush and tried to lift away when I picked the brush up. With that idea not working, I decided to try pressing natural objects into it, starting with this leaf I grabbed from the bushes outside Tom’s house. The effect I was going for– a clean leaf pattern– was a complete failure due to the stickiness, but I accidentally discovered something else that looked great: if you press the leaf (or any other flat material) down into the goop and then pull up, again and again, you end up with this awesome creepy “alien webbing” texture, which happens to blend really nicely into the shape of the lichen.

It wasn’t what we were initially going for, but we were both satisfied enough with our happy accident to go ahead and replicate it across the rest of the bases. 😀 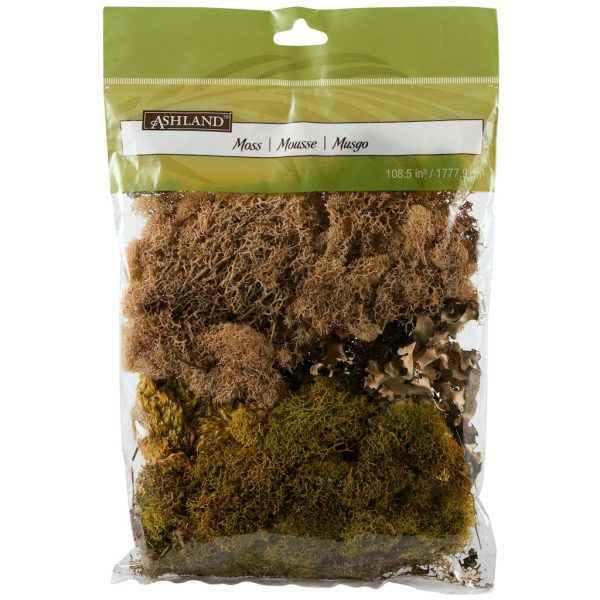 The bag of lichen I bought was a multi-pack with all sort of different “nature things” inside it; many looked dumb (like a big feathery plant thing), but I found one other bit that I liked for Tom’s bases– the sort of leafy… lichen? Fungus? I’m not sure… at the center right in the picture above. 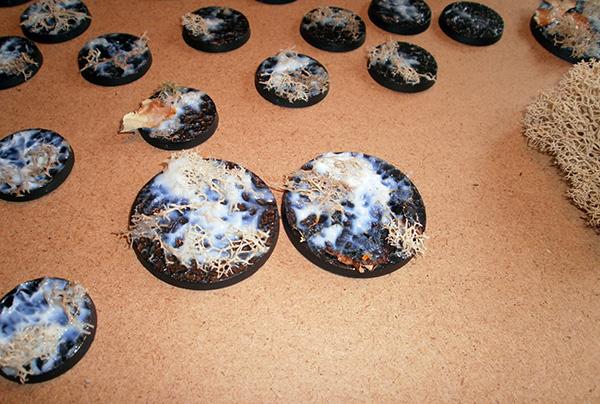 I tore off chunks of this mystery plant and dropped them onto around 1/3 of the bases for an extra visual flourish.

And that was pretty much it for the bases. If you’re looking for interesting natural bases, I highly recommend acrylic gel and “random plant bits”. The specific webbing effect we made won’t suit most armies, but there are a lot of other things you can do with the gel if you’re willing to spend more than the three minutes we dedicated to experimenting before we settled. 😛

I’ve always struggled with airbrushing on small models primarily because of the masking element. It’s easy enough to cover the entire model in a continuous colour area and highlight it, but Infinity models tend to have fairly complicated uniforms, and the handful of times I’ve tried to mask off my first colour to let me apply another one, I’ve screwed it up and the paint went where I didn’t want it; and the time to clean up the mistakes took far longer than the time I saved by airbrushing in the first place. However, what I loved about LazyPainter’s colour scheme was that he was treating most of the model as being made of the same material, and allowing the colour splash to spread across multiple panels: 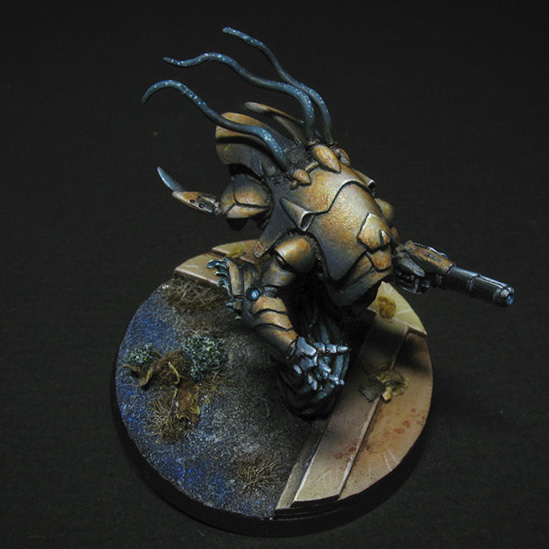 This factor was why I had decided that this technique would be so compatible with Tom’s Onyx army– the models he owned were about 70% robots, which meant that I could justifiably say that they were just made of the same material from head to toe. However, I decided to go for a slight twist on Lazy’s approach– rather than picking one “spotlight” colour for the entire army, I chose three colours– purple, blue, and green– and assigned two of them to every model (with all models in any given “category”– Shasvastii, Morats, utility robots, etc.– having the same colour split). One of the colours would be sprayed from the top left, while the other would be sprayed from the bottom right. This would hopefully create a really cool and creepy contrast effect where they met in the middle. 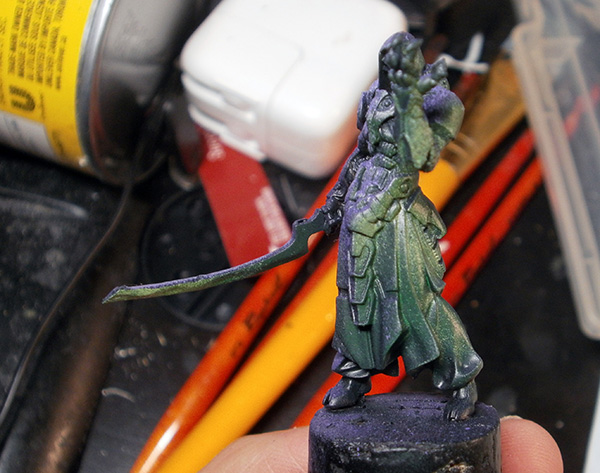 Because I’m kind of bad at airbrushing, this process dragged on over a month, and I was pretty sick of it by the end. However, unlike my failed experiment with Maggie, this one actually worked out pretty much how I wanted it to! I mean, it’s complete garbage compared to Lazy’s inspiration, but my goal wasn’t individual model quality– it was to create a neat overall effect across the army. Tom sucks too much to deserve anything beyond tabletop quality, but even working within that effort level, there are still things I can do to make the army pop and look interesting. And this dual-colour look was certainly interesting. 🙂 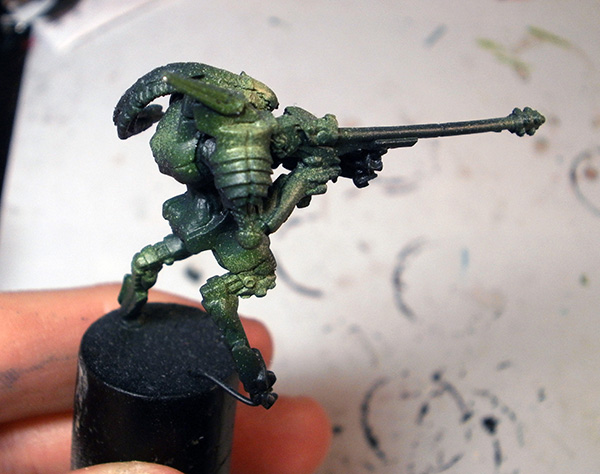 I wanted to keep the models fairly dark, but the airbrushing process had over-highlighted some areas, as well as completely failing to preserve shadows throughout most of the models. To fix both problems, I opted to two-brush blend some thinned Vallejo Signal Blue (an extremely dark, but extremely rich blue) into the undersides of every model in the army. 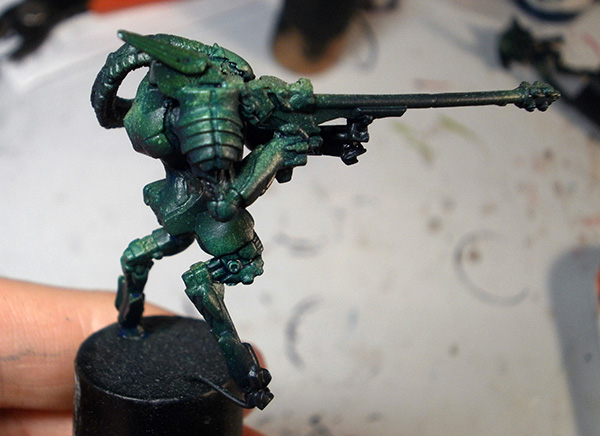 This accomplished both goals, but at the cost of tinting the colours on the flat areas more than I wanted. I was supposed to hand the models off to Tom to finish after this, but the tinting bothered me, so I decided that I would expand my commitment to include army-wide edge highlighting to try to use that process to correct the colours a bit.

This was the first expansion. Soon after, I had an idea for a “glowy stuff” colour that would nicely tie the three primary armour colours together; I allowed myself to believe for a week that I could just suggest it to Tom and let him figure it out, but then I remembered that Tom is Tom, and I just declared that I would do all the glowies myself.

But he was still doing the bases! Well, kind of. I still wanted to airbrush them. But he was doing the detailing! Oh, except the detailing would also look neat airbrushed. So you know what, maybe I’ll just do that too.

I was definitely making him paint the skin on all the living models, though. Because I’m doing enough already, jeez! Oh, except I actually like painting skin. Skin and faces are actually some of the only things I enjoy painting.

Okay, fine, I’ll do all that. But Tom is definitely doing the… uh… shit.

That’s, uh… that’s everything, isn’t it? 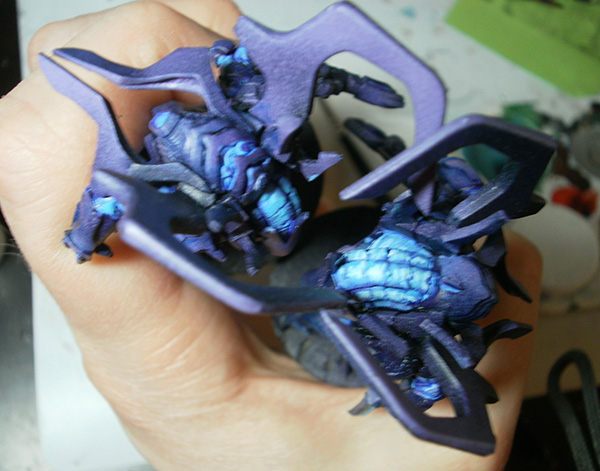 So, okay, whatever. Apparently I’m just painting an entire 700pt army for him. FINE. WHATEVER. But I am at least going to make him HELP.

Something he CANNOT SCREW UP.

…flat colours? For the glowies?

Yes! Yes, that’s good! Once all of the airbrushing and re-shading was finished, I trucked everything down to his house, and Tom and I spent a Saturday back at his dining room table painting glowy stuff. Under my careful supervision, Tom managed to not complete f*** up the application of flat electric blue paint over the “robot meat” and all the various lights and swords and whatever. And then he passed them over to me, and I blended all of the blue bits with dark purple paint to create a really neat two-tone glow. With a final nearly-white highlight quickly dabbed on top, the whole thing looked good enough that you would never even guess Tom was nearby during any part of it! 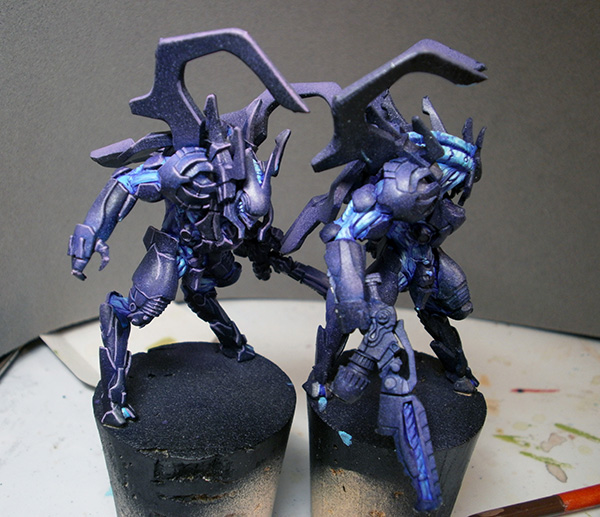 The last step for most of the models was the aforementioned edge highlighting. As mentioned earlier, I wanted to use this step to correct slightly for the excessive blue tinting that the shadow layer had created, which I did by employing a slightly pink-purple on the purple models, slightly yellow-green on the green models, and bright cyan on the blue models. This ended up looking pretty sweet– you can see the difference the final highlight made in this photo (the one on the right hasn’t been highlighted yet).

Every model in the army had two different armour colours on its two sides, and my initial plan was to highlight each side using its corresponding highlight colour. However, when working on my first test Batroid, an interesting idea occurred to me: what if I used the same highlight across both sides?

I wasn’t sure if that was a good idea or not, but the cost of any failure would be borne entirely by Tom, so… whatever, I tried it out. 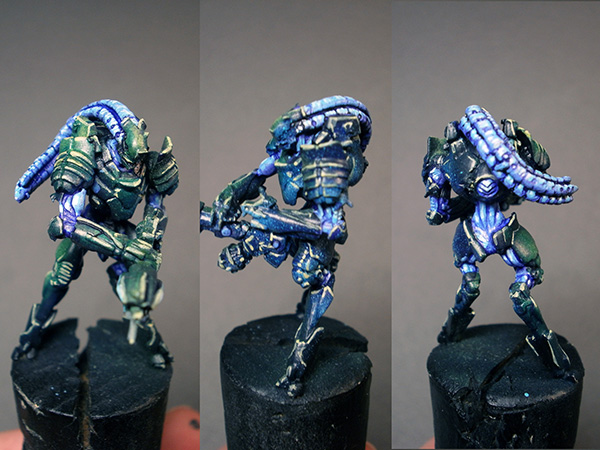 I absolutely LOOOOOOOVE the way these turned out. 🙂 I was only highlighting to a fast tabletop standard (so some of the lines end up too fat or fall out of the lines, nothing is blended, and I didn’t follow up with a pure white corner highlight), but the visual effect is just so bloody interesting that I don’t even see the sloppy application– only the pretty colour contrast. I wanted the models to look properly alien, and this single decision achieved that effect so incredibly well– earthly materials generally don’t highlight that way. 😀

So, yeah. Super pleased with myself. SPUD = GENIUS PAINTER. Officially.

The bases were comparatively easy to paint, and were all knocked out in an evening. Here they’re all being spraypainted dark blue…

…which is then followed up with sort of a teal spraypaint. I didn’t love this colour, though, so I opted to mix a much darker, greener turquoise colour and airbrush that on.

I sprayed this over all of the bases, then used a paper towel to pick most of the paint up off the surface of each base, leaving the darker colour sitting only in recessed areas.

There we go, much better. 🙂 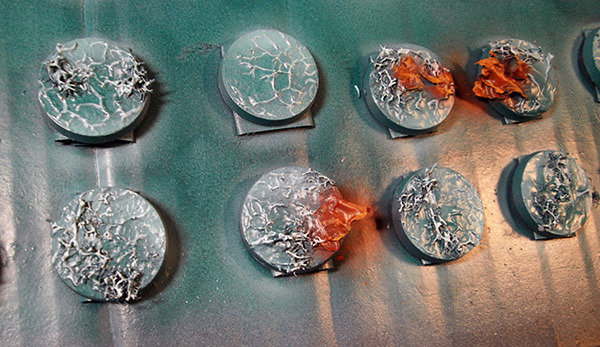 Aaaaaaand then I stopped taking pictures again, so now we teleport forward to highlighted bases with the creepy webbing picked out in nearly-white and the mystery fungus from earlier painted autumnal orange as a sporadic contrast. 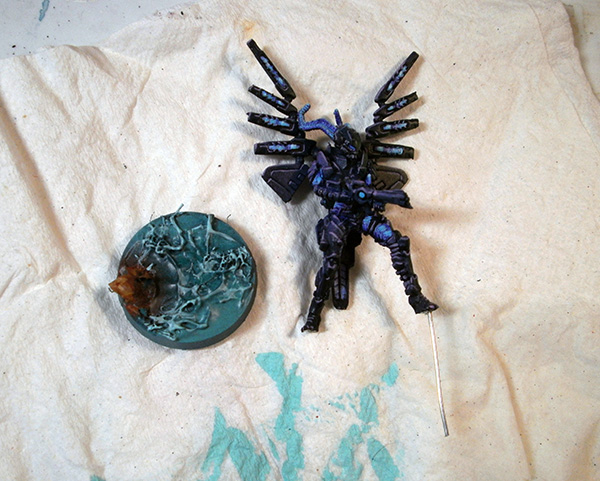 Once everything was painted, all that remained was linking everything up. The process of attaching models to corks at the start had left everyone with a wire coming out of one or both feet, so it was a pretty quick process to pull the wires out of the corks and drill them down into a base. 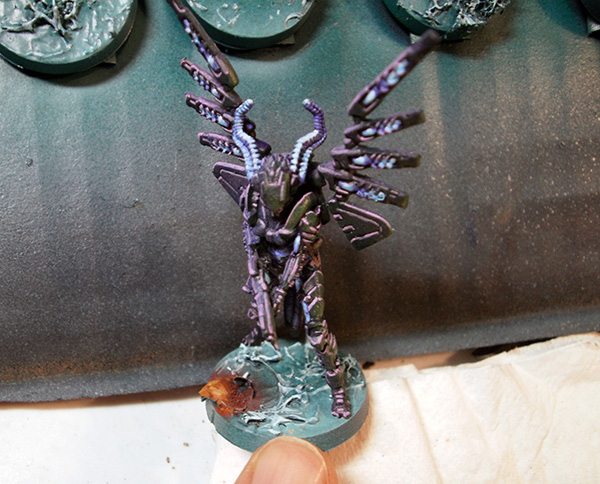 There are tons of painted pictures of the army on Page 4 if that’s what you came here for, but if you’ll humour me for just a moment, there’s one last finishing touch I knocked out to complete the project: a fairly neat custom carrying tray!

3 thoughts on “A Gift Twice Given”