A Gift Twice Given 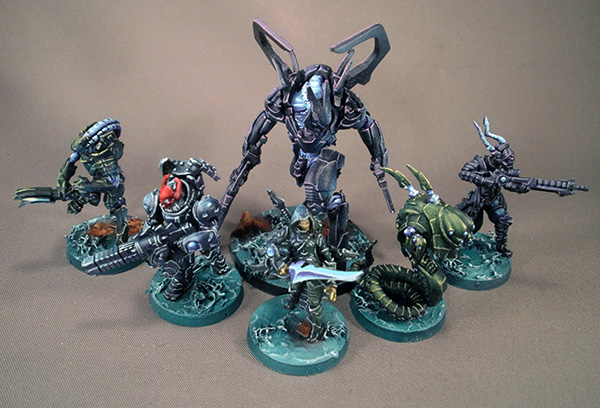 I basically only have one friend, and it’s kind of surprising to me how well that’s working out.

If we were to rewind five or six years, I would be hanging out with quite a few different circles of people– all gamers of varying stripes, but technically still people. I had my D&D group; a handful of Warmachine players I was still close to despite having soured on the game itself; the Infinity group I had just started to poke my nose into; a small group of friends I met with on Tuesdays for cards and board games; and even a group of “my friend’s friends” whom I occasionally joined for random movies and games. In most of these groups, there would be people I enjoyed hanging out with, people who were… let’s go with “inoffensive”… and people for whom I spent considerable mental energy devising plans to avoid having to ever speak with.

Here is an approximate venn diagram of these groups circa 2012: 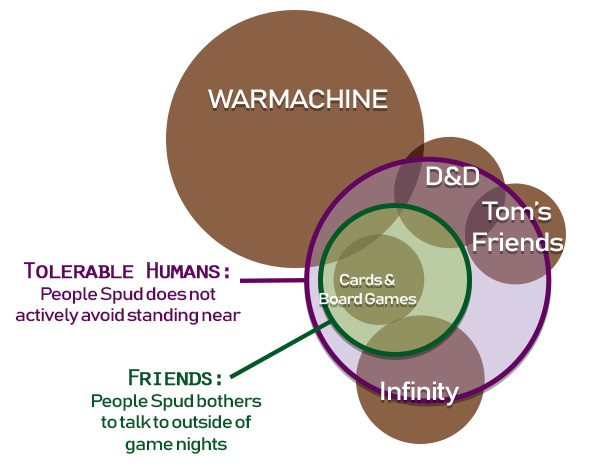 As you can see, I considered my entire board game group to be good friends, with maybe one or two people from every other group warranting semi-regular communication outside the physical confines of our gaming store. There were certainly positive aspects to having a social circle of this size, however it was also very stressful for me– people usually don’t guess this based on my hilarious, charming, and generally spectacular personality, but I’m actually quite introverted. I can put on a dazzling show for a few hours, but when it’s done, I need to crawl back into my dark cave and shut the world out while I recharge for a few days.

Hey look, the sidebar is back!

Spud is going to keep rationalizing his social ostracism for another thousand words or so, and then he’s largely going to gloss what you probably came here for (the painting process of this, yaknow, PAINTING PROJECT) in favor of somehow shoehorning foamcore construction into this post. If that all sounds as entertaining as pounding nails through your foot, you’ll probably want to jump ahead.

If you do decide to keep reading, don’t say you weren’t warned.

And then, over the course of a few years, things started to shift. A core member of the board game group moved away, and the group dried up soon after. My growing disgust for Warmachine made it harder and harder for me to justify driving out to see those people, and eventually I just dropped the game– and the local humans who played it– entirely. And then the big weight dropped: my local store, where all of these groups were based, closed its doors.

If I could be bothered to animate the diagram above to reflect these events, you would basically see three things happening:

Tom is one of the worst people I’ve ever met. He isn’t particularly bright, ambitious, creative, interesting… attractive… I could go on. Tom likes the DC movies, looks like John Oliver after a bad motorcycle accident, and thinks puns are funny. But despite being a walking, talking singularity of negative traits, there are three qualities Tom possesses that have allowed him to survive the Hunger Games of social collapse that has occurred since 2016:

And so we arrive at the current state of affairs: I’m doing less nerd stuff than I used to, involving smaller groups of (admittedly less annoying, on average) people, and I talk to exactly one person on a day-to-day basis. Having only one friend might sound sad to you, but for an introvert like me, only having to expend energy on one person turns out to be far less stressful and draining. And I still get to interact with the wider groups at designated times, but when game time is over… that’s it. I’m free! I’m reminded of one of my dad’s quotes while growing up:

“What’s the best thing about other people’s children?”

Aside from the general reduction in social stress, only having one friend has turned out to have one other surprising benefit: I can give way better presents now! Pre-collapse, I simply knew too many people to be able to afford to buy things for all of them, so I opted to build awesome models for my friends instead. As a result, I used to spend a huge portion of my annual hobby time building Christmas and birthday presents for various people I didn’t hate. Like, I would start making Christmas presents in September and usually not be finished until February. It was an insane self-imposed workload, and even in the year or two preceding my social collapse, I had started to narrow the scope of who got presents each year just to give myself some room to breathe.

But with my non-family gifting obligations reduced to a single person, the workload has been reduced to a nearly perfect state of “do whatever occurs to me”. If I think of multiple present ideas, that’s fine! I probably have time to do all of them! If I think of a present that has a dollar cost (instead of just a time cost), that’s also fine, because that doesn’t immediately make me feel obligated to spend similar dollar amounts on anyone else! And if one of my present ideas happens to be an absolutely enormous project that will dominate my production schedule for months on end… also totally fine! It’s the only present I need to work on!

It probably sounds like I’m being a bit facetious here, but I swear I’m not– I’ve spent most of my adult life imposing unreasonable gift-giving obligations on myself and then enduring months of suffering every year to somehow try to fulfill them, and being free from the weight of those obligations for the last two years has contributed immeasurably to my general mental well-being.

As it turns out, Isolated Potato = Surprisingly Content Potato. <3

So, hey– guess whose birthday was on Thursday

Tom has wanted to start an Onyx Contact Force army since the day the Xeodron TAGs were first previewed. However, he had several hobby priorities further up the line than his beloved alien robots, so nothing ever came of that dream. However, with his birthday approaching last year, I decided to pick him up a basic Onyx force (300pts + a couple of swap-in models for variety). He was excited to start them, but had been making good progress on finishing his two previous armies in the preceding months, so he decided not to open any of the alien boxes until his queue was clear.

This ended up happening about three months later, at which point the two of us started discussing various colour schemes that might be within his grasp. You see, nestled amongst his library of other failings is the fact that Tom has spent his gaming career aggressively competing for the position of “worst painter I’ve ever seen”. 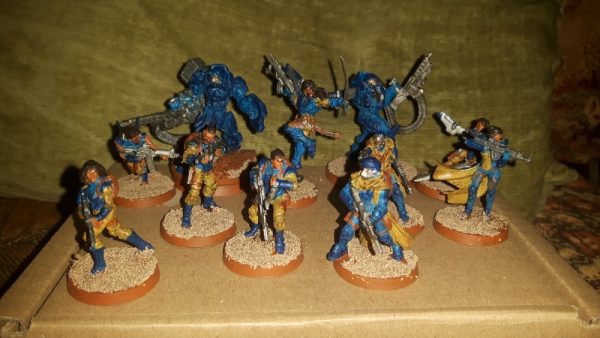 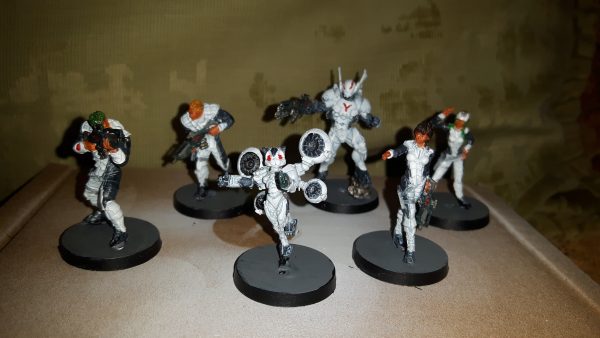 Over the course of 8+ years of excruciating instruction, I’ve managed to drag his painting level barely over the line from “AAAAAHHH MY EYES” to a comparatively lofty “May cause mild nausea”. But even with those gains, we must remain realistic; while you and I are free to explore the breadth of our imaginations when devising new and exciting colour schemes to thrill the senses and delight the mind, Tom’s priorities must necessarily revolve around ways to minimize the harm his models inflict on bystanders.

A low-key discussion of possibilities (“No, Tom. You can’t just… dip them in jam.” “PEOPLE LIKE JAM, SPUD!”) continued for several weeks. However, this discussion came to an unexpected conclusion toward the end of the summer when I stumbled across some models that were posted to the WGC Infinity Facebook group by a Russian painted who goes by the pseudonym “LazyPainting“:

When I saw these pictures (and some others from the same army), I immediately had the following series of thoughts:

QUICK DISCLAIMER: I’m going to talk a lot in this article about “applying Lazy’s technique” or “mimicking his effect” and so on. However, in practice,

So, yeah. Anywhere I say I’m doing what he did, just mentally substitute “badly mimicked a picture I saw on the Internet months earlier and didn’t remember correctly anymore” and you’ll have something closer to the truth. 😛

In the past, Tom and I have “collaborated” on models in situations where I wanted to try some painting technique I had seen but was too afraid of ruining my own models if I screwed up. However, because literally anything Tom does to his models ruins them by default, there’s no actual risk involved if I simply borrow his stuff to act as my test dummies. And on the off-chance that things do go well, Tom reaps the benefit of prettier models. Everybody wins!

The most notable example of this type of situation happened with his Maghariba Guard; I had had my airbrush for around a year and found it useful for painting terrain, but was very intimidated at the thought of transitioning to airbrushing models. I figured that a larger model like a TAG would be the easiest way to get started, but I wanted my own TAGs to look… yaknow… good, so I didn’t want to use them as my guinea pigs. So instead, I borrowed Tom’s unpainted Maghariba and painted the basecoat for him, then returned it to him to finish the metals and other colours. 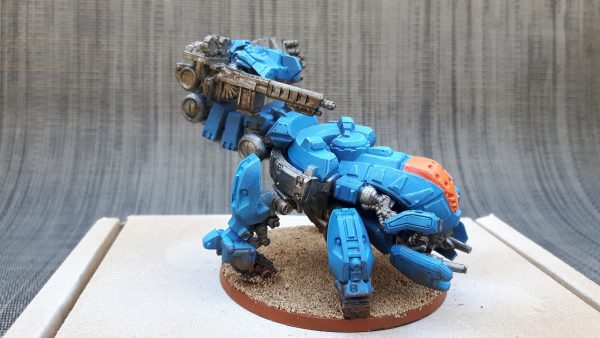 Can’t tell it was airbrushed? That’s because I had no idea what I was doing and f***ed it up! 🙂 The result was very Tom, but I got what I wanted out of the exercise– I became a bit more comfortable with my airbrush, and learned that I needed to use much sharper shading and highlighting colours to get a proper airbrushed effect.

Initially I intended to do much the same thing with Tom’s Onyx– I wanted to try out LazyPainting’s badass “coloured spotlight” effect on my airbrush, but didn’t want to do any of the boring clean-up work that would be needed afterward, so we agreed that I would provide basecoats only, and then hand them back to Tom to destroy. However, as you’ll see in a bit, this commitment kept creeping up as I had more ideas I wanted to try, and, well, long story short, I ended up painting his entire army and handing the finished product to him the day after his next birthday. That timing wasn’t even intentional– it was just when things happened to wrap up on the project.

Which means that without really meaning to, I ended up giving Tom (basically) the same present two birthdays in a row. 😛

3 thoughts on “A Gift Twice Given”