So, right off the bat, I want to explain that it’s taken me four months just to figure out how to present what I’m about to share with you. It’s a sprawling project that incorporates narrative fiction, detailed mission writeups, character art, terrain work, web design, and a ton of homebrew rules. I’ve tried to assemble written, audio, and video commentaries to present what I built, but in each case, I found that giving my usual detailed blow-by-blow of the work just ended up being really long and tedious. I keep going back to the drawing board to find a new way to encapsulate everything for you, and I keep coming up with bad solutions.

I’ve been at this for five months, and I don’t think I’m going to have any more success in the next five than I did in the last five. So rather than continue this fruitless struggle, I’m going to concede that I will probably never figure out a way to present the project with all of the context that I would have wanted. It was just too big.

Screw it. I won’t even bother. 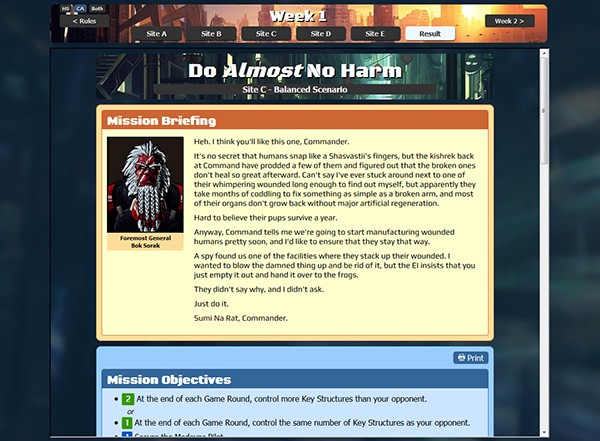 If anyone’s unsure about whether to click that link, here’s a quick FAQ to explain what it is.

I ran an Infinity story league at my store last summer. We had ten participants (though two eventually had to drop out), assigned to two teams: the Human Coalition, and the Combined Army. Each round, I wrote 4-5 missions, and the two teams each distributed their players to each site according to player preference. The missions were designed around an ongoing storyline that I wrote, as told by a cast of characters I drew and crafted personalities around.

It was super fun, but it was an absolutely life-shattering amount of work, and as such I will likely never do anything like it ever again.

Q2: How do I navigate around your web thingie?

Use the Week arrows at the top to move from one week of missions to the next. Click a Site button to read the mission that was played at that site. Each mission is preceded by a briefing– by default you will see the writeups for both the Humans and the Combined Army, but you can use the “HS/CA/Both” buttons at the top left to switch into and out of the single-faction views that were originally presented to the players.

At the end of each Week is a “Results” page that tracks how my players did in their run-through of the campaign, and reproduces their “mission debriefing” writeups if you’d like to read those. They insisted that I included those somewhere, so I did. 😛

If you want to try one of the missions out, there’s a Print button underneath the briefing for each mission that cuts out some of the extraneous content and turns the whole page black and white.

Oh, and there are a couple of spots where extra pages are inserted– the campaign ruleset at the very start, and a short fiction piece before Week 3. The “Next week” button will take you past those to the next block of missions.

I think that’s about it. Let me know if anything doesn’t work. 🙂

Q3: Awesome! So, I can run this campaign with my group?

I really doubt it! 🙂

The campaign is very story-centric, and the story for each week was tailored to the outcomes of the previous week’s games. So you can try to run it at your story, but unless your players achieve identical results to my players, the story will quickly stop making sense.

Also complicating things is the fact that the campaign is fairly terrain-specific. I created my space ship and sewer board explicitly for this campaign, so if you don’t have comparable terrain, you’re going to have difficulty playing those missions.

Q5: Are the missions balanced?

Ehh, they’re not too bad. I used ITS missions as my model, but diverged quite a bit in terms of complexity, and also created quite a few “asymmetrical” missions where the two sides have different advantages and objectives. All of the missions received one live playthrough, and some got a single playtest in advance. So there could absolutely be problems that I didn’t catch.

My focus was on making the missions fun; if any balance or wording issues came up, I was there to resolve them in person for my players. So if you do decide to play any of them, try to approach them from a cooperative mindset– if something seems blatantly wrong or if you discover a really obviously broken loophole, figure out a way to quickly resolve it with your opponent before carrying on. If you get really rules-lawyery with these missions, you WILL find errors, and they WILL ruin your game.

Q6: How canonical is the fluff?

I made sure that my story didn’t blatantly fracture the game’s setting, but when writing for my characters, I was far more concerned with a) making the different races feel different from each other, and b) making the characters feel plausible. In the fluff I’ve read, Shasvastii and Morats seem to talk pretty similarly to humans; so the odd speech patterns I assigned to each alien race should be considered a fairly extreme form of artistic license.

Random Note: A previous version of this writeup contained long writeups to introduce the characters. I scrapped that version, but still liked the character descriptions I wrote, so you can find them here if that type of thing interests you. 🙂

Q7: Did you steal your mission briefing system from Starcraft?

Q8: Anything else you want to mention?

Nothing immediately jumps to mind. Read through it if this kind of thing interests you, or don’t if you have no time for what essentially amounts to homebrew rules and fan fiction. And I’m not being judgmental there– I personally can’t stand reading either of those things. I write my own, but have no interest in reading other people’s. So I can definitely empathize. 😉

Alrighty, that’s about all I have to say.