The first Zero is done, but a second one remains. I’ll be putting this one in a very different pose to clearly differentiate the two. 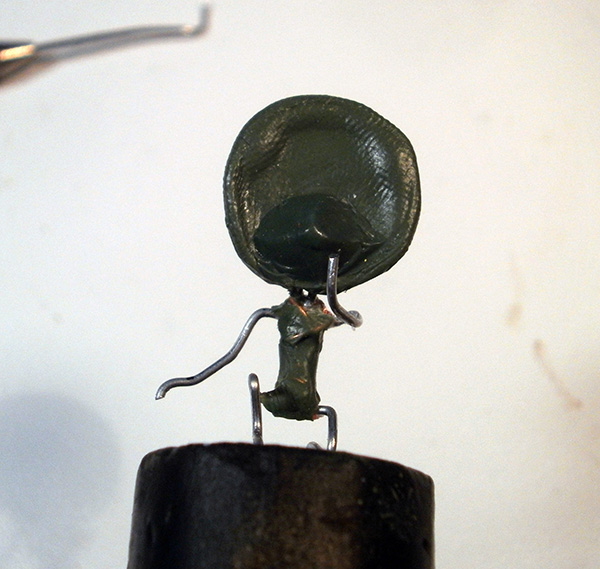 The generic armature was twisted into shape using needle-nose pliers. My armatures terminate at the tips of the toes, and then I leave a bit of extra slack to let me embed the extra wire in a wine cork, which becomes a handle I can hold onto throughout the sculpting and painting processes. 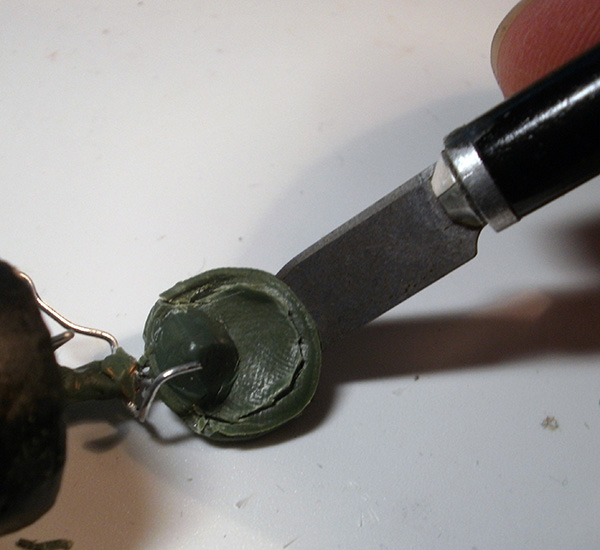 So as I mentioned earlier, my initial guess for the ideal size of the head loops was quite a bit too big, resulting in the wire poking way too close to the surface of the head. Equipped with that knowledge, I set about performing some corrective surgery on all of the remaining armatures. I want to keep as much as I can of the existing work, so I just cut the putty disc down about 25% and strip off the dried putty from around the top part of the loop. 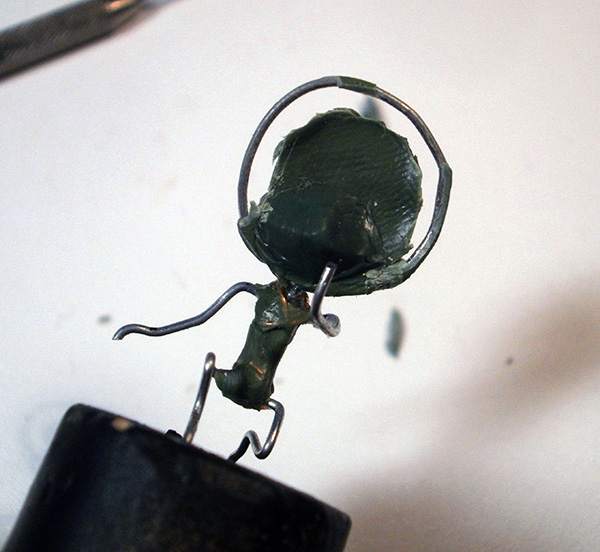 This leaves a gap between the loop and my desired head width. 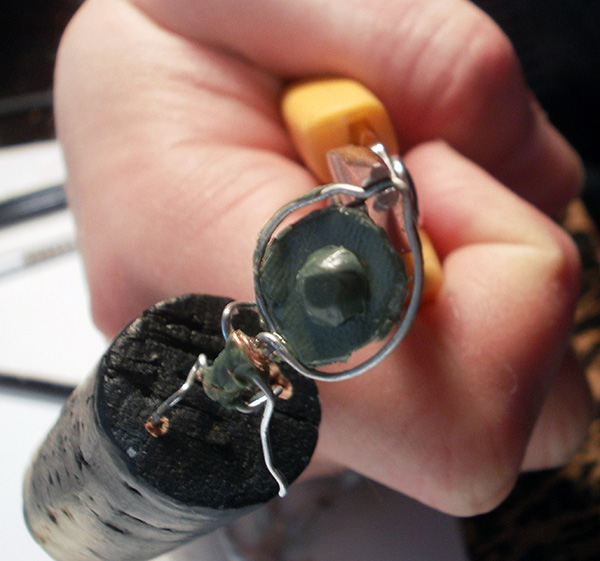 To fix this, I grab a pair of pliers, grip the loop just off of center, and twist inward to pull the sides of the wire toward the smaller disc, and yanking the excess wire toward the top. 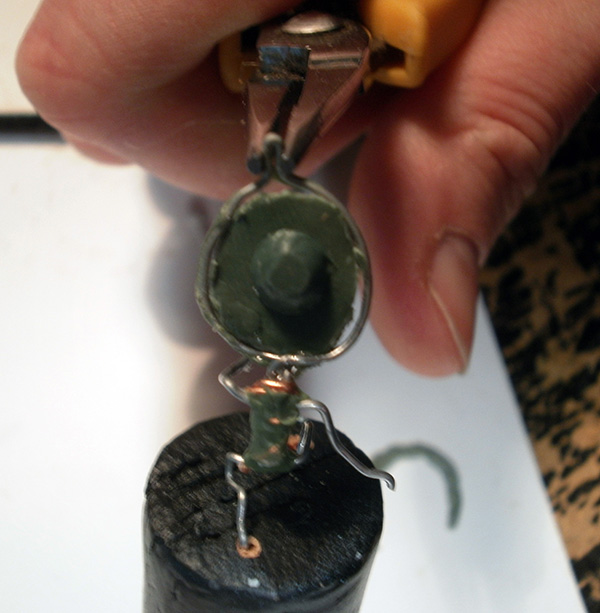 I do this on both sides, then squeeze all of the excess wire into a small tab. 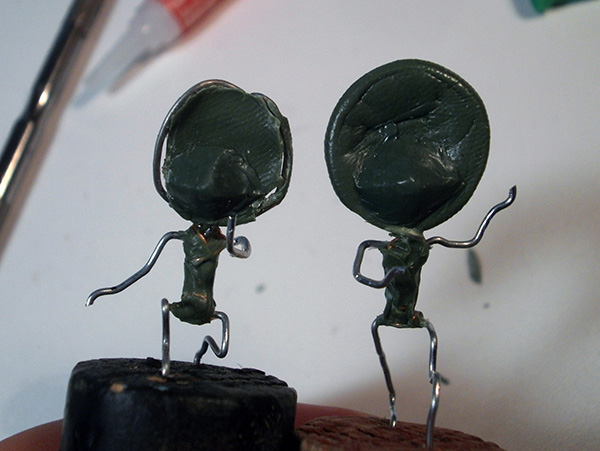 I tuck the tab down behind the head, and drown the new loop-to-wire bond in super glue. The new heads look a lot messier, but that really isn’t relevant given that they’ll be entirely hidden in the end. ^_^

Alrighty, with the reconstructive surgery out of the way, let’s start sculpting! 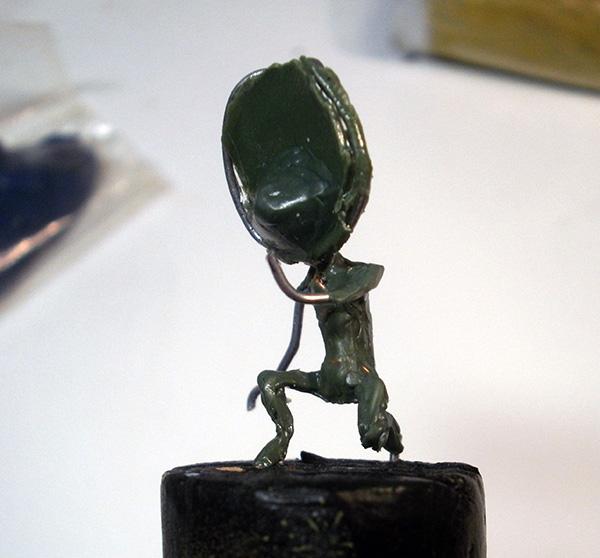 I sculpt in Fimo, which is a polymer clay available at most craft stores. Fimo doesn’t stick to metal on its own, so you need to apply a layer of Green Stuff putty over the armature as an adhesive layer. The Green Stuff is thinly applied using metal sculpting tools. 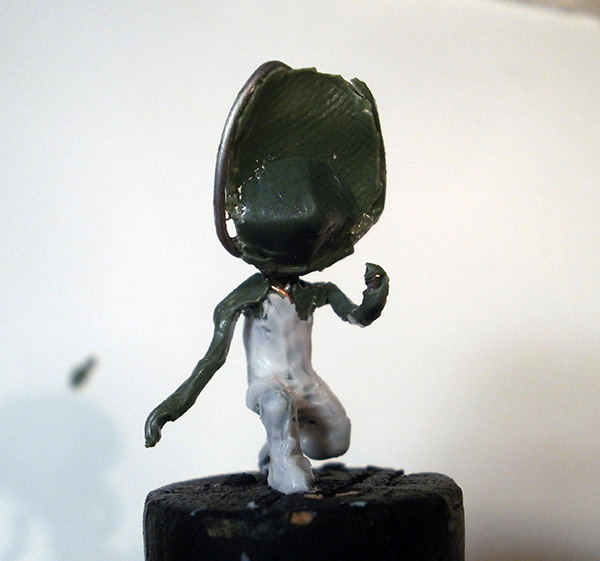 The first layer of Fimo is immediately applied directly over the still-soft putty. Once again, it’s pressed into place using metal sculpting tools; clean surfaces aren’t terribly important at this point, since many layers will be going on top. 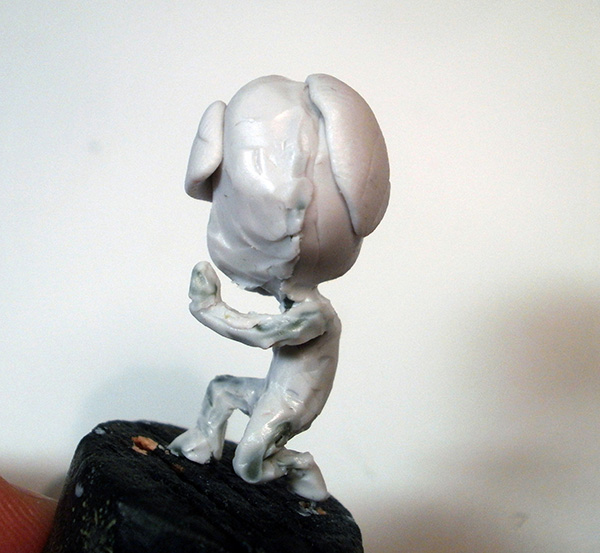 Clay is added to the model in shreds and slabs to arrive at the desired thickness for each part. At this stage I’m still working entirely with metal tools, as the ability to quickly jam bits of clay together is far more important at this stage than getting clean surfaces. You don’t need very much clay to bulk out an arm or a leg, but the sheer size of chibi heads mean that they’ll invariably require huge amounts of clay to be stuck on. 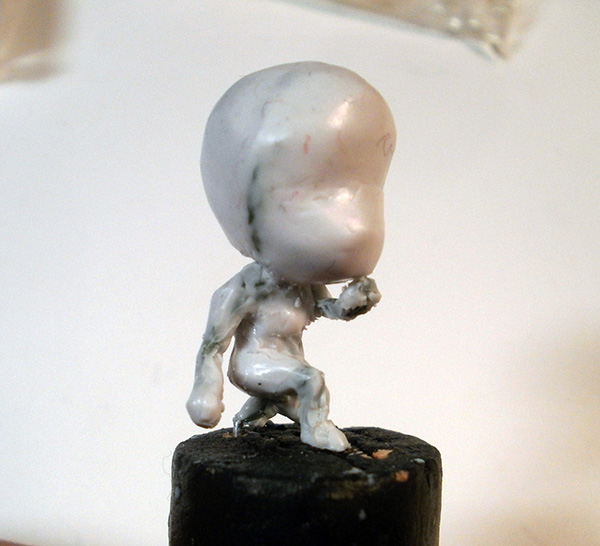 I keep applying bits and pieces of clay and blending them into each other until the model has the general type of physique I’m after. At this point, I finally do a smoothing pass using silicone clayshapers, which are able to achieve a much smoother finish than metal tools thanks to their pliability. 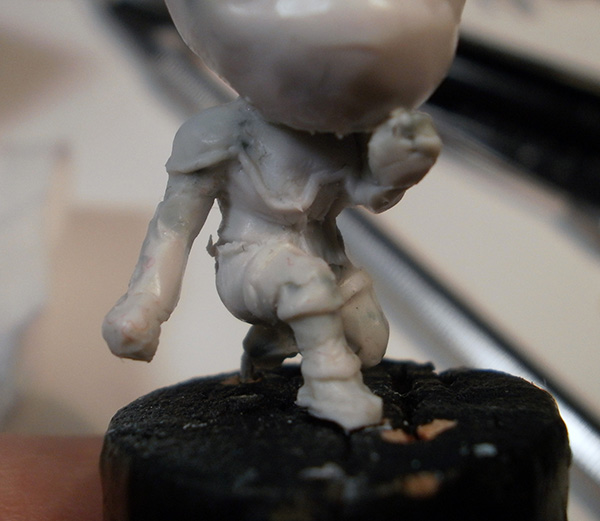 Once I’m happy with the basic body masses, I start adding clothes. I typically start at the model’s feet and work my way up. Thick garment breaks are added first, and then I add smaller surface details.

Over the course of this project, scientific curiosity and sheer boredom prompted me to change up the order that I applied details from one model to the next– for some I started at the bottom and moved up as I typically do, while for others I started on the torso and moved outward.

Results of experiment: it really doesn’t matter, start wherever you feel like. 😛 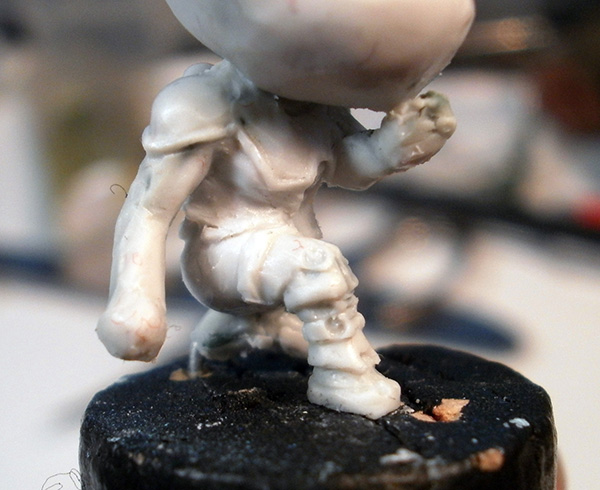 The detailing on the second Zero progresses in much the same way as the first– the elaborate boots are the only major detailing challenge, with the rest of the model being relatively straightforward grooves and ledges. One unique aspect to this second model is the scrunched-up pose, which limits my access to the chest and abdomen; however, it also limits the viewer’s ability to see those areas, so as long as I make an effort to get the details to a state of “pretty good”, it’s unlikely that anyone will turn the model over to the correct angle to see the slightly less refined and complete details. 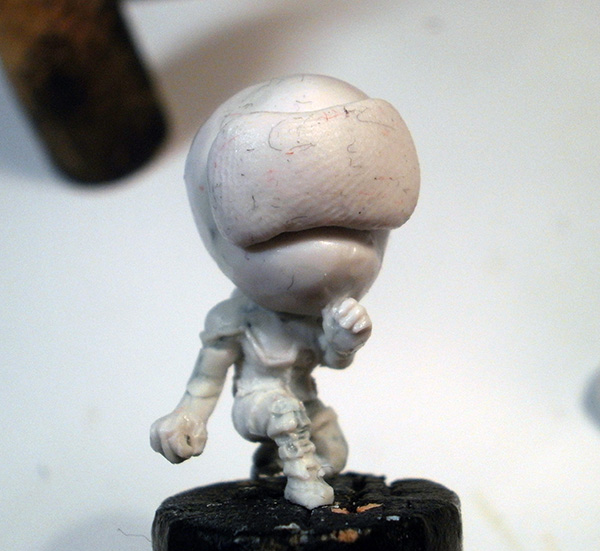 I started all of the army’s heads as a bean shape, but the Zero’s round helmet requires a pretty smooth egg shape, so I put a big chunk of clay over the eyes to round everything off.

To build the hands, a bit of clay is applied to form the entire block of fingers. Hands are one of the many elements that are easier to sculpt on a chibi model than on a normal-scale model. You can often get away with a more simplified grooved “mitten”, which then allows each finger to support its neighbours.

The grooves are pressed in about halfway down the mitten, and then things are smoothed out a bit. Once that’s all formed, I use a knife to separate some of the finger tips and slightly pull them away from the rest of the hand. More work would be needed to add individual finger segments on a normal model, but on chibis, a rounded finger looks just fine. 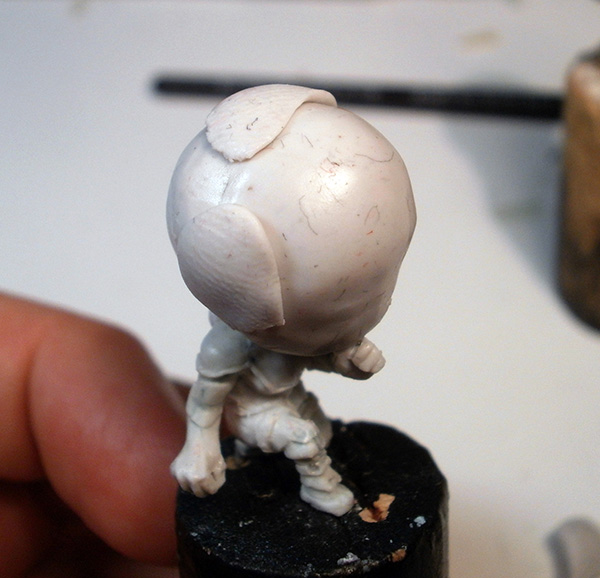 The head needs SO MUCH CLAY. These things have RIDICULOUS heads, you guys. 😛 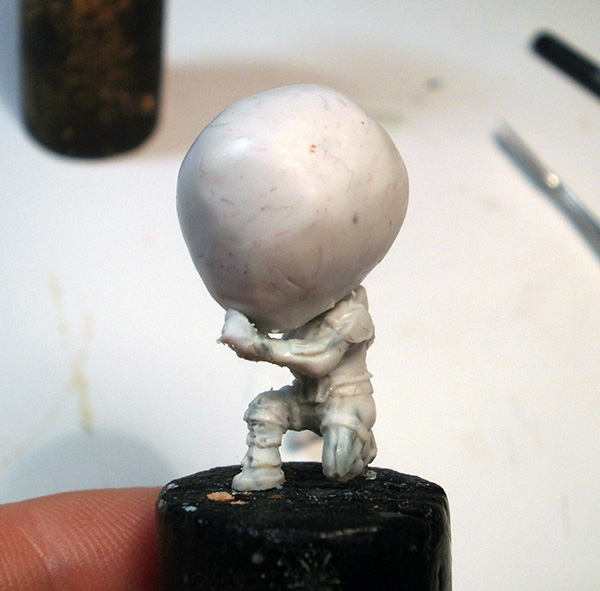 The body is one cleaning pass away from being complete, so I move up to the eye. 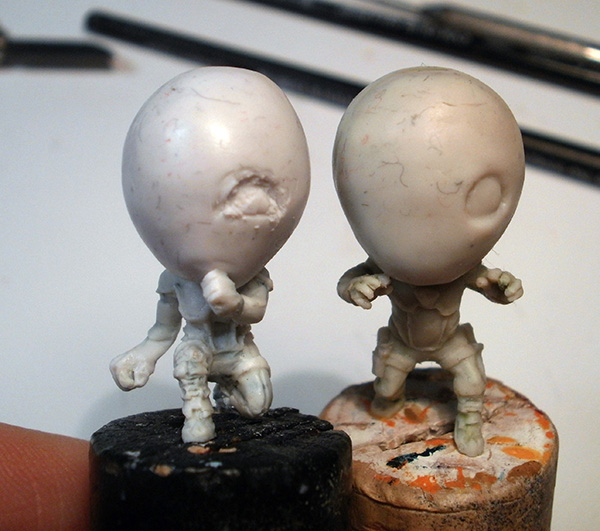 Zeroes only have one eye on their helmets. I determine the placement and general size of the eye by poking a circle in with a piece of brass tubing. I then refine that general guideline into the desired eye shape– generally, flat on the bottom with a rounded top. I want to sink the eye a bit, so I use metal tools to dig small amounts of clay out of the edges of the eye, which I’ll clean up in a sec.

Bare-headed models would have a pretty elaborate process to create eyelids, cheeks, brows, and every other kind of surrounding soft tissue, but the Zeroes just have a basic cartoon eye shape to deal with.

Like I said, I started with the easiest ones for a reason. Ploughing through some really fast, simple models is a great motivator for progressing into the more complex stuff later on. 😛 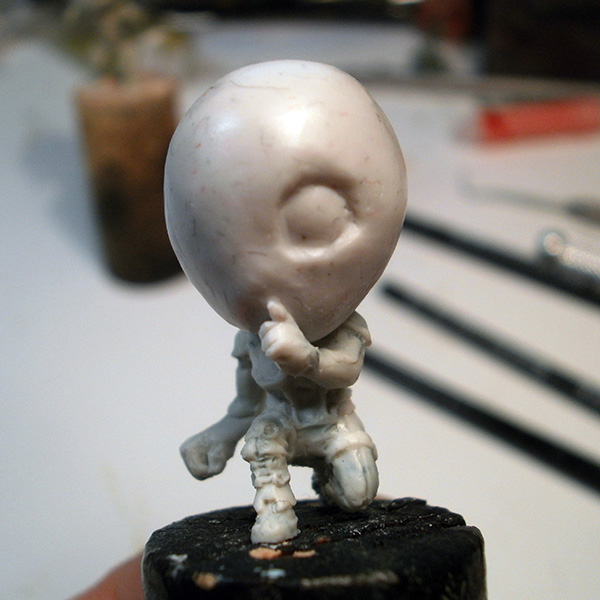 The rough eye shape is smoothed over using clayshapers. At this point I also go in and finish up the hands by adding thumbs and the “shushing” index finger. 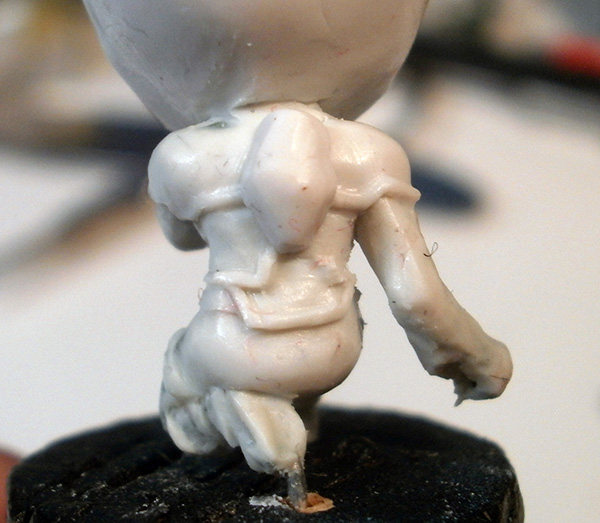 The backpack was started a bit earlier in the process, but I’m pulling the pictures forward to keep the narrative easier to follow. MOOOOVIE MAGIIIIIIIC! 😛

The Zeroes’ backpacks are the second-most-complex part of their costumes after the boots, though that still isn’t saying much. I start by forming the general shape of the backpack by layering on small shreds of clay, and then smush them together with metal tools. 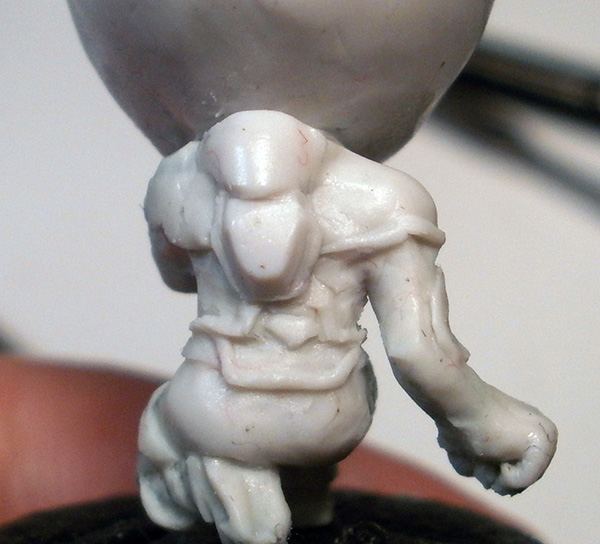 I use metal tools to turn the soft, rounded shape into harder edges, then smooth them over with clayshapers. 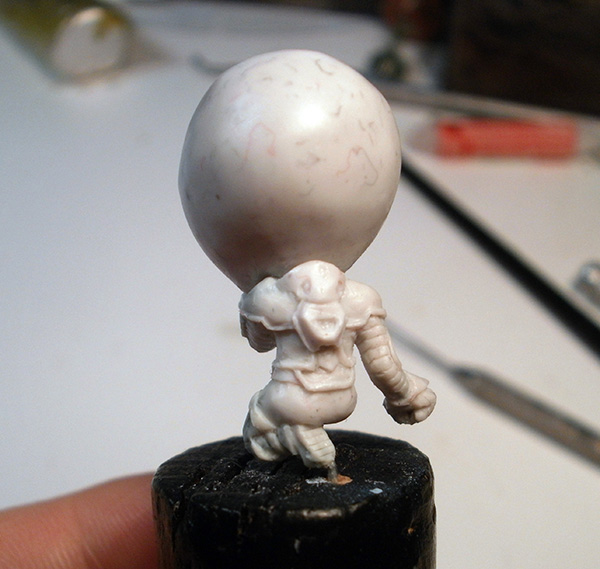 I do some cleanup to mimic the actual zero’s costume shapes. Also pictured here: the ribbing from the Zero’s arms and legs, which is just pressed in with a knife and then cleaned up with clayshapers.

This seems like a good spot to reiterate something from the introduction: chibi sculpting is DRASTICALLY faster and less miserable than normal-scale sculpting for a number of reasons. One reason is the scaling changes; parts that are usually not that complex, but which just have huge amounts of surface area to cover– the legs and torso– are shrunk down to a more manageable size, requiring less labour to cover with acceptable levels of detail.

The other reason, and the primary factor that specifically removes misery from the process, is the fact that the expected sharpness of the details is different for chibi sculpting. Clay naturally wants to assume rounded shapes, and most of the time that you spend sculpting is spent relentlessly pushing, pulling, and smoothing the clay into sharp edges against the material’s continual objections. However, while sharp edges are absolutely the goal of most real-scale sculpting, the chibi art style’s emphasis on cuteness means that round details are not just acceptable, they’re often better at creating your desired effect than if you were to pull the detail out into razor edges.

These and other smaller factors are the reason I was willing to embark on this journey at all; an army of full-scale models would take VASTLY longer to sculpt than these chibis. Even though they’re the same height (35mm) and ultimately have less total surface area, real-scale models just require an enormously longer refinement process that would drive me to self-harm before I finished the combat group.

So, yeah– if you’ve ever wanted to try sculpting and find normal-scale models intimidating, I would absolutely recommend starting with chibi models. Even if you don’t have any particular affection for the style– personally, I didn’t when I started– it’s just such a more forgiving scale to work in than typical miniature scale. 🙂 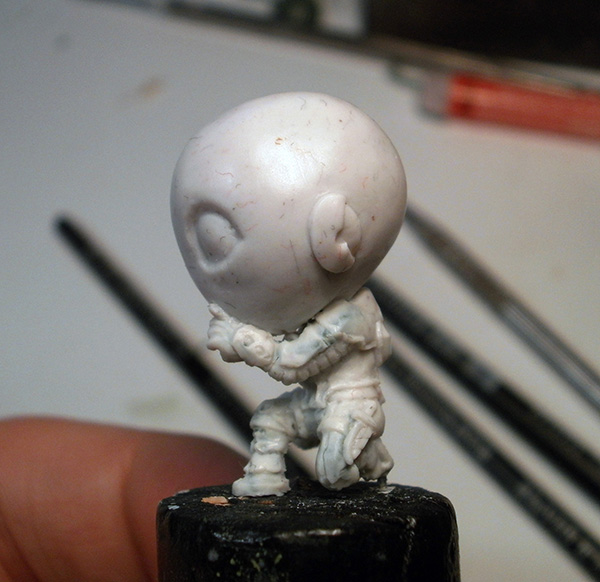 I added the ear thing.

Oh, right, that was the last thing. She’s done now.

OH WELL, NO GOING BACK NOW! 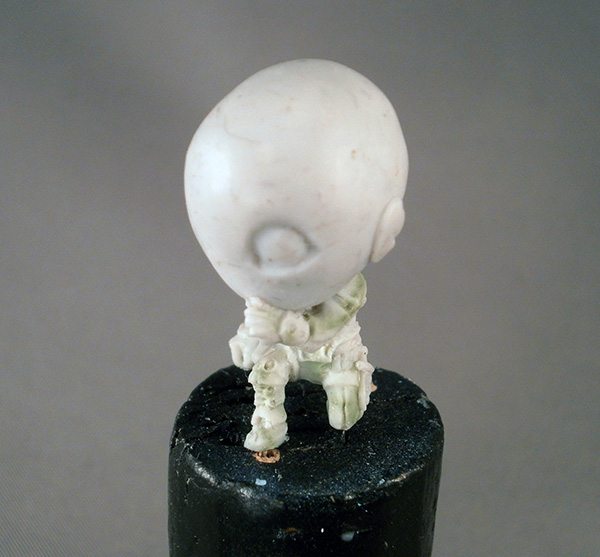 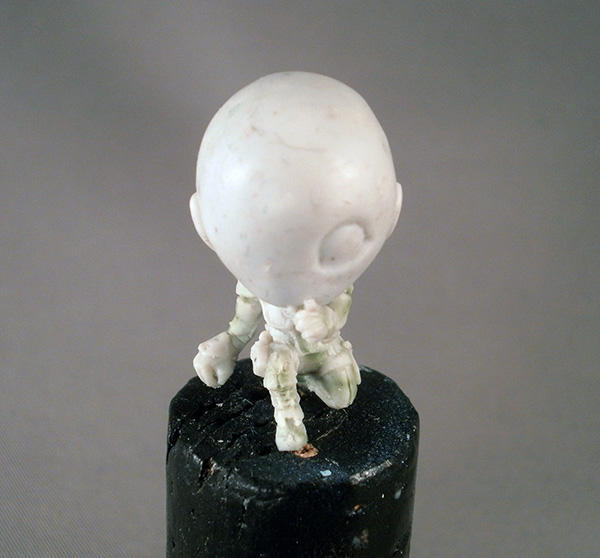 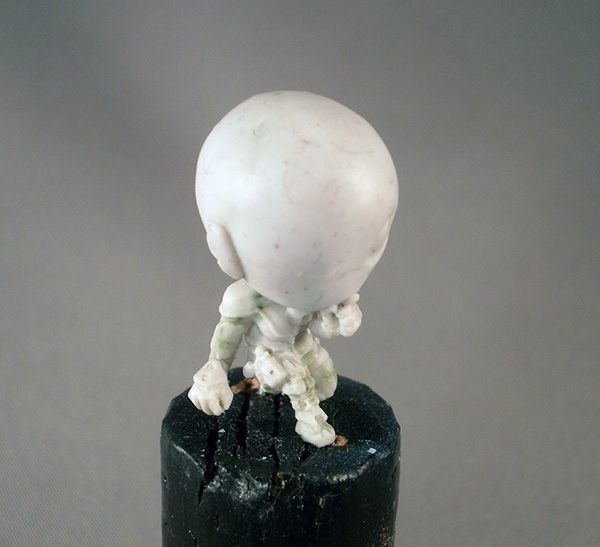 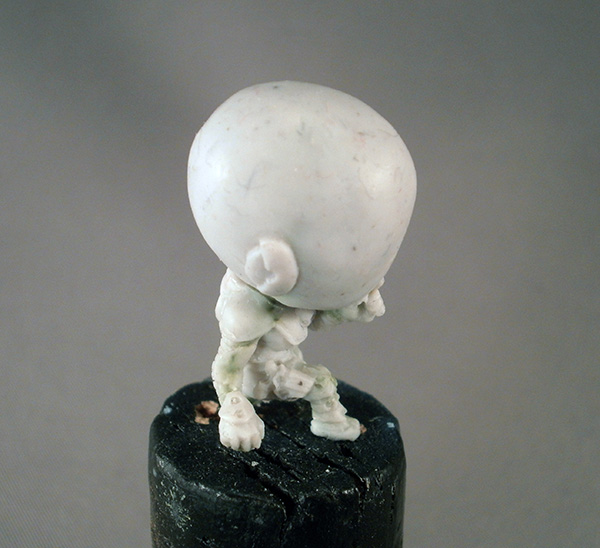 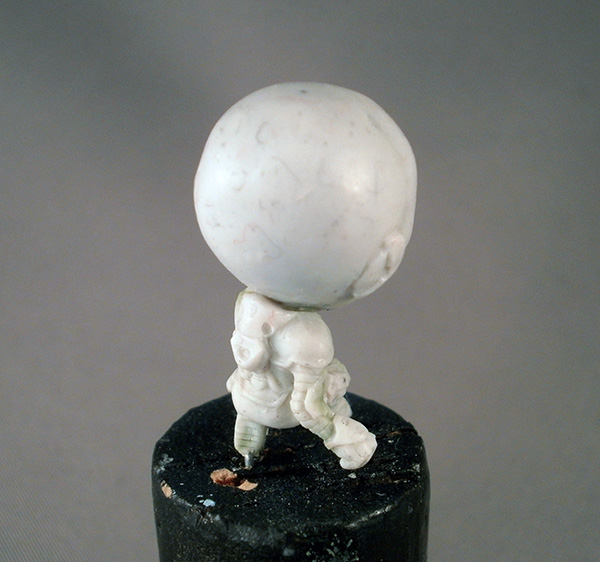 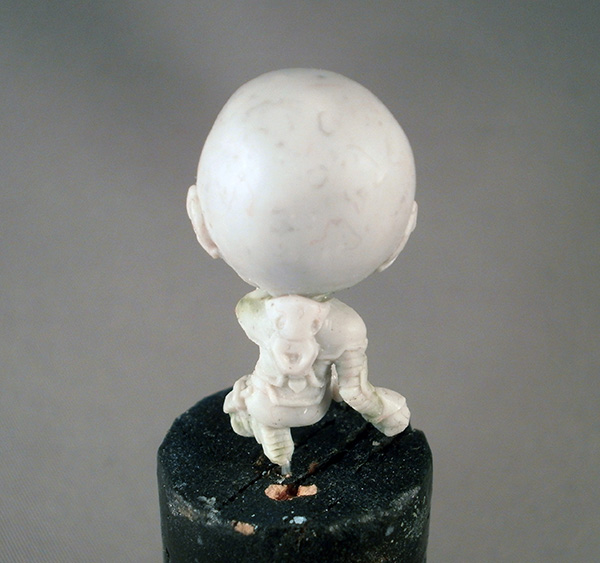 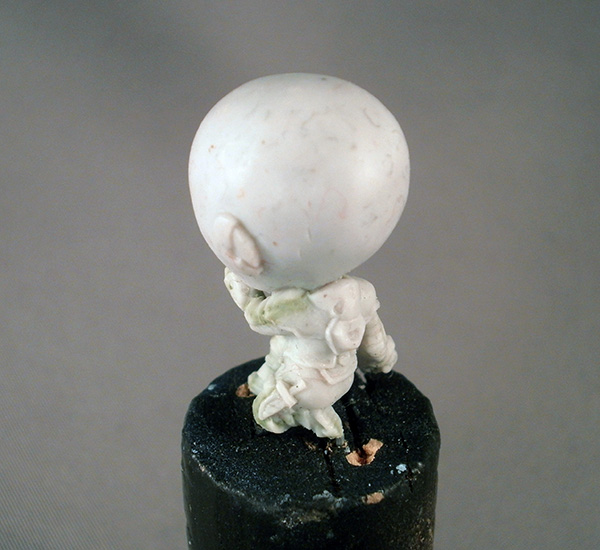 Painted pictures are, again, on the last page if you want to jump to those. Otherwise, let’s take a look at a very different generic trooper– the beefy ORC troop!