I ran an Infinity league this past summer at my store, and as I was prepping one of the weeks, I realized that the story I was writing really demanded that a mission or two take place in a sewer.

This was a problem, seeing how my store does not have sewer terrain. However, this was not a large problem, because… come on. It’s freaking sewers, people.

Three short blasts of the Terrain Party Horn summoned my army to my side, and we proceeded to churn out our smelly battlefield in the span of an afternoon.

The project had only a few hard requirements:

#1 and #3 pretty much solved each other, so that was nice. #2 worried me for a bit since I didn’t relish having to buy a bunch of dollar store Tupperware to make up the “islands”; however, as I was brainstorming in the days leading up to the assembly day, I took a look down at my rarely-emptied kitchen recycling bin (don’t worry– everything gets rinsed. :P) and noticed that I had apparently been eating a lot of salad over the last few months, as evidenced by the fact that I had something like 20 mushroom containers waiting to be thrown out:

These containers are pretty great for future terrain, as their raised and lowered panels (which are really just there to reinforce and strengthen the otherwise flimsy plastic) have a nice future-y feel to them.

I laid them out on my kitchen floor as a test (the 1ft tiles are very helpful for visualizing this type of thing), and they stacked up into a really nice terrain layout. With that, I had my primary materials! 🙂 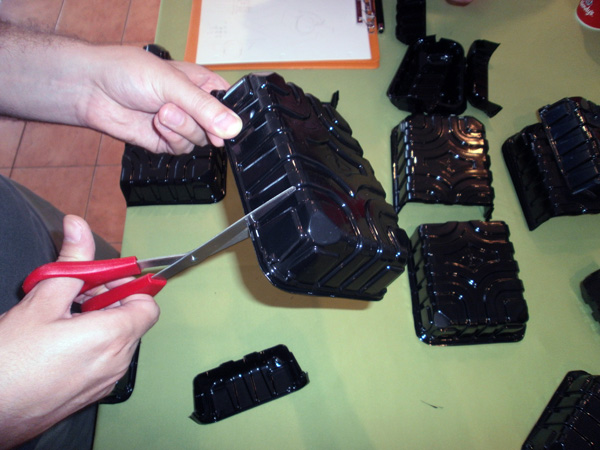 I lugged my plastic booty to the store and was greeted by my two able assistants, Tom and Ben. Neither is an especially experienced or… er… competent terrain-maker ( 😛 ), but Criterion #3 above and my own astounding talent and leadership made this only a minor hurdle.

I quickly drew up a list of the pieces I wanted to make:

This would nicely use up the supply of containers while giving a variety of component layouts. With the list in hand, Tom picked up a ruler and scissors and got to work cutting the flimsy plastic containers to the required sizes. 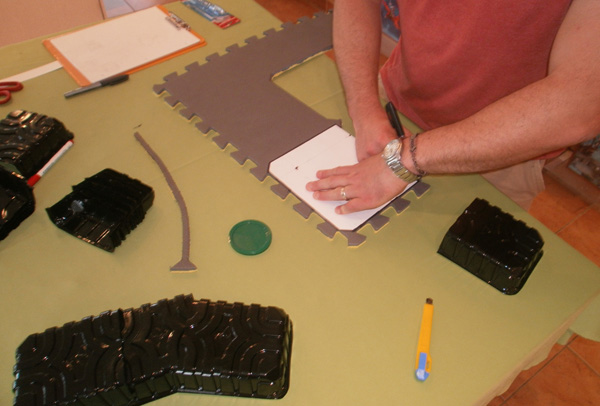 Meanwhile, Ben set to work creating the walkways that would wrap around the “walls”. These were cut out of thick foam puzzle-shaped floor mats Spud picked up a few years ago and had been looking for an excuse to use; they have a really neat repeating pattern pressed into them that passes well for futuristic industrial flooring. 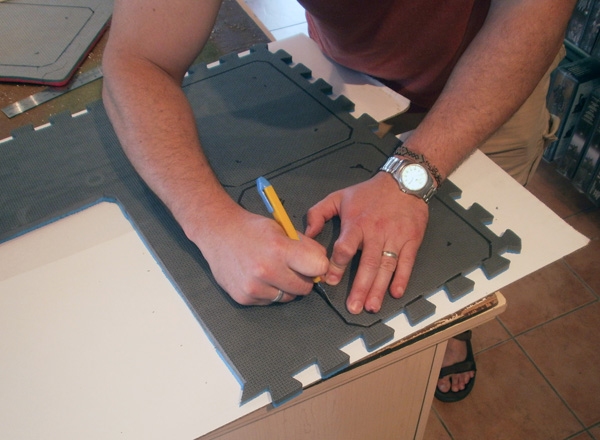 Spud created a paper template to match the size of the containers, which Ben then transferred to the mats using a Sharpie and cut out with dollar store utility knives. 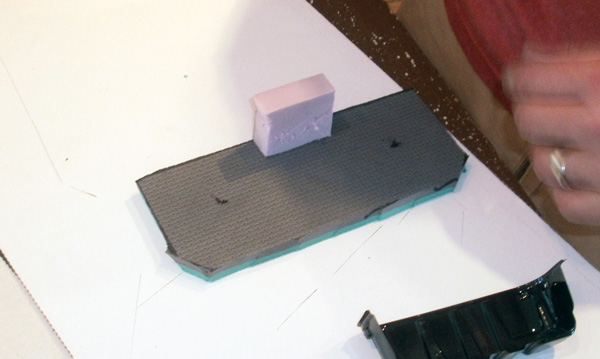 Once all of the base materials were cut to size, we started assembling them. Spud had cut some styrofoam blocks to the interior height of the plastic containers for additional support; these were glued to the foam bases anywhere we anticipated the “roof” needing reinforcement. 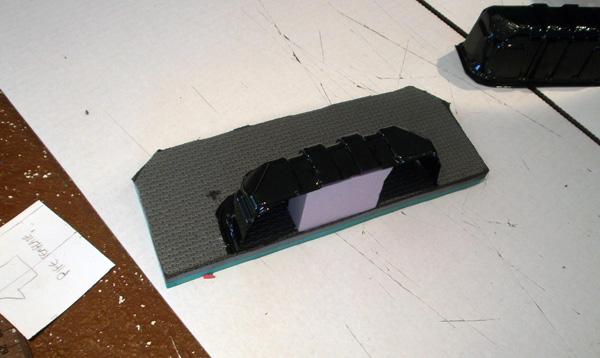 The corresponding mushroom container slices were then stuck down with a veritable river of hot glue. 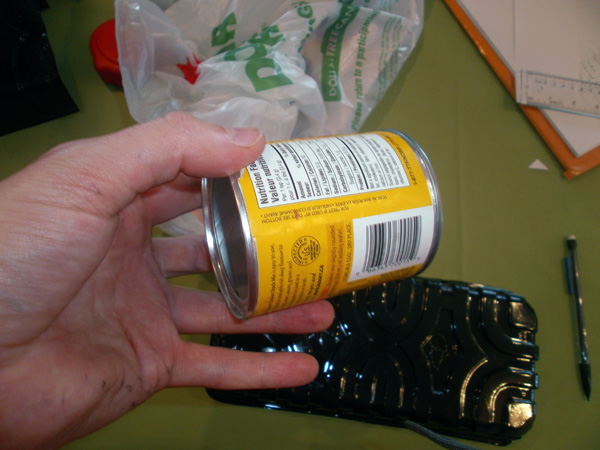 Simple rectangles would have sufficed if our only mechanical consideration was a need to block off line of sight, but I also decided to build large pipes into the blocks to let models take cover when only halfway down a “sewer island”, as well as to give entry and exit points to the surface for the campaign mission I was planning.

To create these, I turned to another container I had stockpiled a lot of: Knorr dry broth containers. I used 8 for this project, which means that I only have 51 remaining on the shelf in my apartment from 6 years of hoarding.

I really wish I was kidding.

Have I ever mentioned that I’m single? 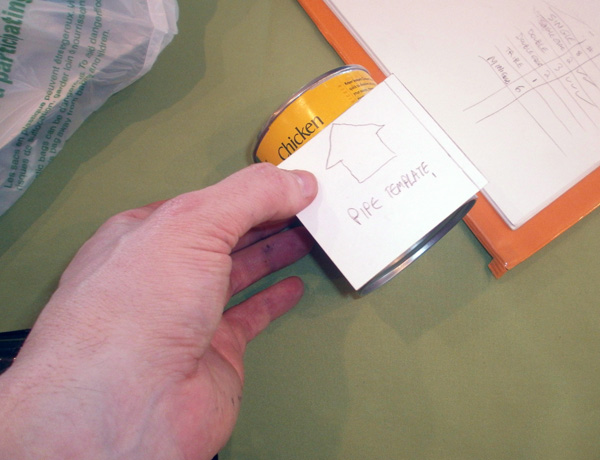 These pipes would be embedded inside the containers, so I rigged up a simple paper template to let me cut holes to accommodate them. 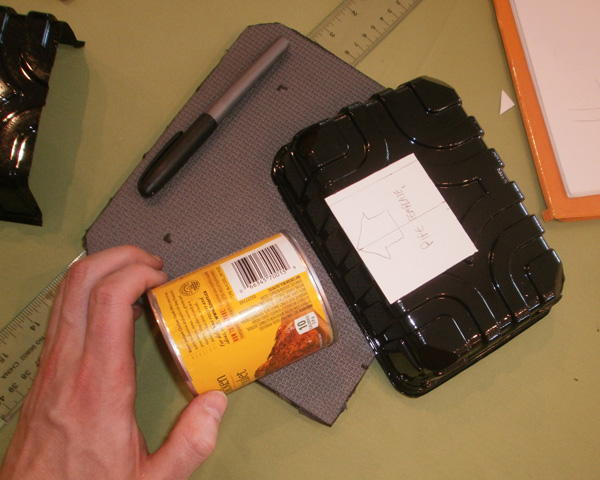 We debated dropping them down a layer into the foam layer, but eventually decided that this might make them too flimsy, and simply made our peace with them protruding upward a bit. 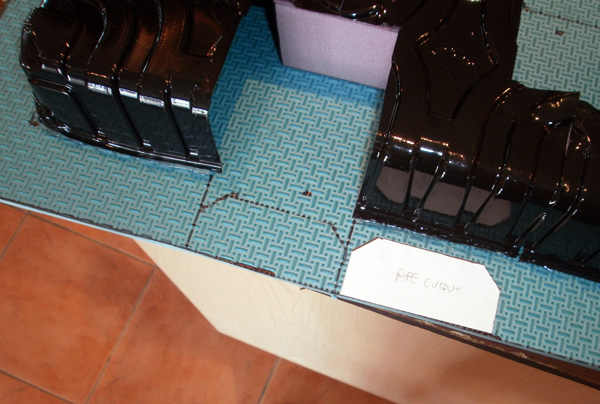 Spud couldn’t get over the mental block of the pipes dumping their Space Poop Payload onto a plate metal walkway, so after much discussion where we considered options to jut the walkway out, lift it upward on a small staircase, or have an area of wire mesh for the poop to pass through, Tom and Ben convinced Spud to stop fussing so much and just cut a section of the walkway out; models would simply need to jump to get around, or wade through the Poopstream. 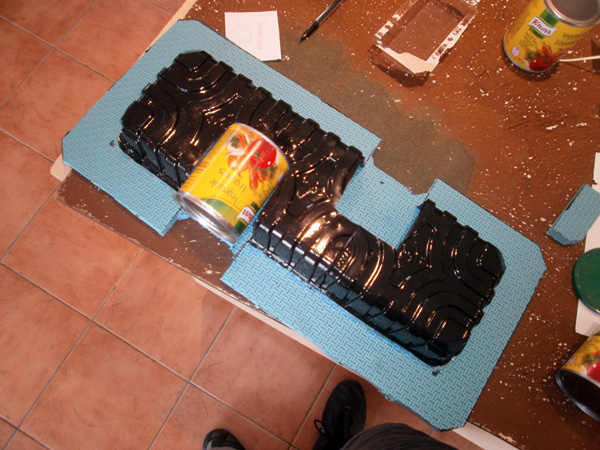 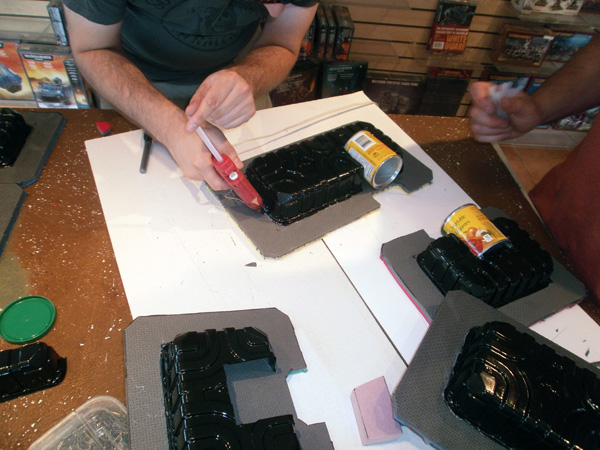 I think we ended up using over 30 hot glue sticks over the course of the project. We really didn’t want anything coming apart. 😛

We created eight small bridges (with foam nubs underneath to prop them up when they’re spanning between two islands) to let models move around without getting their socks wet. After some playtesting, we’ve subsequently determined that we need about twice that many; I’ll probably churn a few out next month when I have some free time. 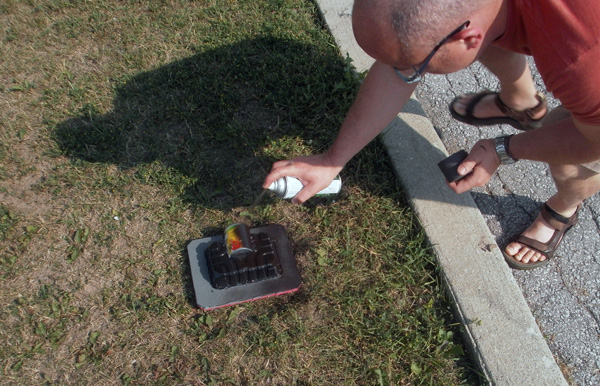 Once we were satisfied that the pieces met our exacting quality standards, we hauled them outside and started painting them. We did this directly on the Hobby Kingdom’s front lawn, because we are the worst customers. 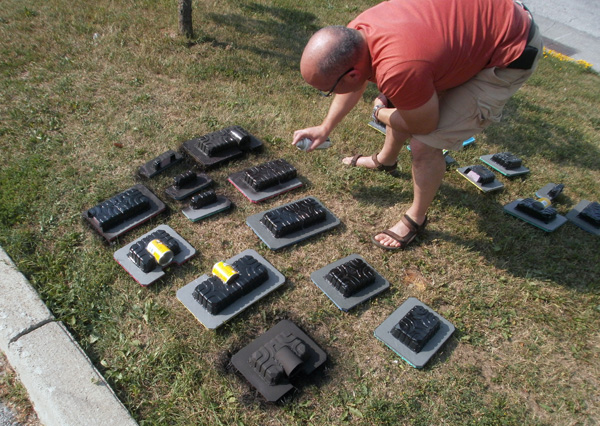 Everything was given a dark brown basecoat to start, as I find this makes a fantastic undercoat to essentially any colour of terrain; the bits of brown that poke out under a drybrushed or zenithal-sprayed topcoat will give a really nice soot/grime/spacepoop effect.

The brown we used here is something I hadn’t seen at Home Depot before– Rustoleum Camouflage paint. Most spraypaints have at least a small amount of gloss to them, but this stuff was utterly matt with nary a specular highlight in sight. Totally pleased with the result, highly recommended for anyone looking to prime terrain. 😀 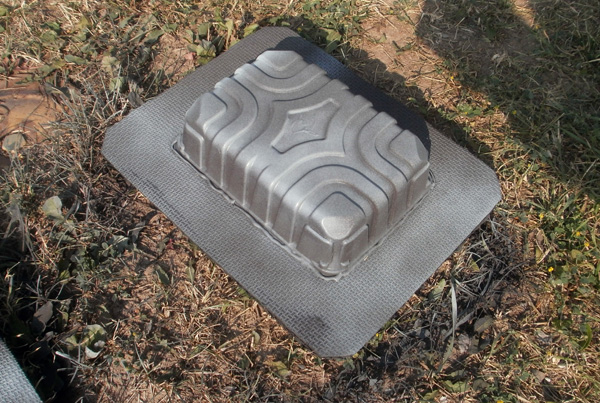 For this project we went the zenithal spray route, taking care to give each piece only a light dusting from each side to let the brown show through. 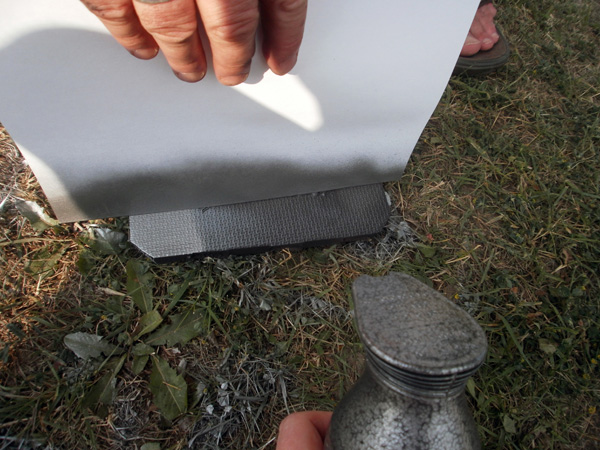 The only “details” that needed to be picked out were the walkways, which were sprayed with a “beaten metal” textured silver paint (though this effect didn’t do much on our already-textured foam panels). We only wanted this on the walkways so that they would look like a different material than the walls, so Ben held up a sheet of cardboard to mask the walls while I quickly sprayed the foam. It took a while to go around all four sides of each piece, but in the end we got the effect we were after.

Everything was loaded onto spare puzzle pieces and hauled inside to dry overnight.

Total time from planning huddle to completion of painting: six hours. Not too shabby. 😀

I swung by the fabric store on my way in the next day, and with some simple green cloth in hand (because as we all know, sewers in the future must always be full of green gunk), I laid it all out to see how it looked: 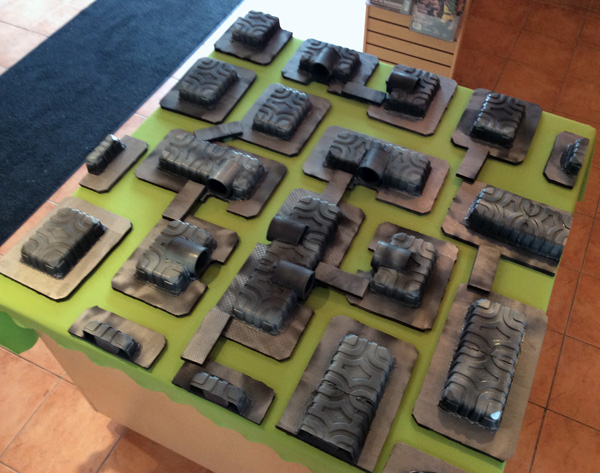 We’ve been playing on this terrain set for a few months now, and have found it to be quite functional for Infinity. A few problems have been identified, but they’ll be easy enough to fix:

But even without all of this stuff, the board still looks pretty great considering how little work went into it, and functions quite well on a mechanical level. 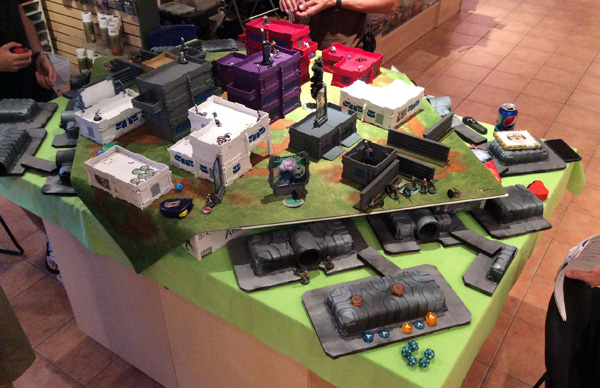 And of course, it added some really fun dimensions to our league. Mostly it served to create full sewer boards, but one week also had it serving as the fragrant infiltration vector to allow some Alien Scum to sneak into a human base.

Suffice to say, Ben, Tom, and Spud are pretty happy with the return on their minimal time investment. 😀